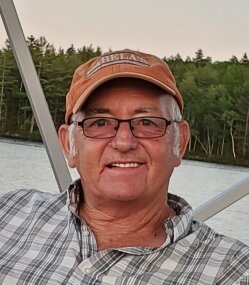 Jeff graduated in 1976 from Calais Memorial High School and later got his welding certificate.

Jeff was a hard worker and a man of many talents and was always willing to share his talents by helping others...he could do just about anything! Throughout the years he worked as a welder, logger and maintenance supervisor but his passion was always being on the water, hence, he became "the best fisherman" for over 40 years. He met and became good friends with many of his fellow fishermen and loved reminiscing about his fishing tails.

Jeff enjoyed spending time with his devoted wife, Mary-Jo, at their home in Florida, camp at Nash's Lake, 4-wheeling, time with family & friends and any time spent on the water.

Jeff will be sadly missed by all that knew and loved him.

In honoring Jeff's request, there will be no service.

In lieu of flowers, donations may be made in Jeff's honor to: PAWS Brave Hearts, 368 South St., Calais, ME 04619 or The Ark Shelter, PO Box 276, Cherryville, ME 04622. Arrangements by Mays Funeral Home, Calais.
To order memorial trees or send flowers to the family in memory of Jeffrey J. Smith Sr., please visit our flower store.