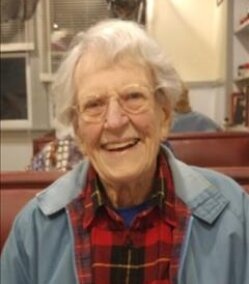 Jean was born in Greenwich, Connecticut on January 10, 1927, daughter of Donald and Nina (Warren) Wilhelm. Jean was raised in Riverside, Connecticut, and in 1943 graduated from Greenwich High School.

Before starting college Jean took a year off, working on a farm in New Jersey, and later for the Stamford Advocate newspaper. In 1944 Jean started at Smith College in Northampton, Massachusetts, graduating with a degree in theater.

Jean taught theater at Wheaton College in Massachusetts for a couple of years until she decided to further her education at West Virginia University, where she obtained a master's degree in theater. Jean then went to Cornell University to take some courses, before moving to New York City.

While in New York Jean worked as a designer and stage manager for the Equity Library Theater, where she rose to production coordinator. Not one for "big city life," Jean then moved to Jennerstown, Pennsylvania, where for 10 years she worked as set-and-lighting designer for the Mountain Playhouse. Each season of this professional summer stock theater ran for 24 weeks, with a new show produced each week.

Believing in the worth of a good education, Jean then went on to earn a doctorate in theater in 1967, from the University of Minnesota in Minneapolis.

Jean's love for adventure then led her to move to Australia, where she for 12 years was senior lecturer in theater at the University of New South Wales in Sydney.

Among her accomplishments in Australia were setting up Australia's first summer theater in Mittagong, New South Wales; and becoming the first professional woman to direct a play in Australia.

Jean eventually returned to the United States, where she became professor of theater at Goucher College in Baltimore, Maryland. There she created the United States’ first distance-learning master's degree in arts administration.

While teaching at Goucher Jean enjoyed traveling to Maine, and exploring the many small towns and islands along Maine's coast. Reading in a magazine about Todd House bed and breakfast in the city of Eastport, she decided to visit for a few days. While there Jean visited the local theater, and knew she had found her home.

By 2002 Jean had moved to Eastport to a house she had built. She became extremely active with the Eastport Arts Center and with Stage East, eventually becoming a board member.

With her knowledge and love of theatre, Jean helped move the Eastport Arts Center operation to its current location on Washington Street. She designed and implemented its theater and other facilities, and directed several plays for Stage East.

The last play she directed was “The Glass Menagerie,” by Tennessee Williams, in 2013.

Jean will be missed by her many dear friends, and by all who knew her in the theater world.

In lieu of flowers, donations may be made to the Eastport Arts Center, 36 Washington St., Eastport, ME 04631, or online at www.eastportartscenter.org . A memorial gathering will be held at the Eastport Arts Center, details to be announced. Arrangements by Mays Funeral Home, Calais & Eastport.
To order memorial trees or send flowers to the family in memory of Jean Wilhelm, please visit our flower store.