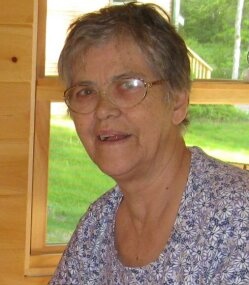 Calais – Jean Ada Hayward, 78, passed away Sunday, December 8, 2019 at Calais Regional Hospital surrounded by her children. Jean was born in Ship Cove, Newfoundland on July 28, 1941, one of 14 children of Richard and Genevieve Wheeler.

Jean attended the Ship Cove area schools until the passing of her father, at which time she had to leave to help raise her siblings. She worked as a nurse’s aide in the local hospital until moving to Calais after marrying Clinton Hayward Jr. Jean raised her children and became a Police Matron with the Calais Police Department. Most recently, she worked in the cafeteria at Calais Middle School.

Jean was a Communicant of Immaculate Conception R.C. Church in Calais and in earlier years the St. Croix Bowling Club and the Jaycee’s. She enjoyed dancing and listening to her brother play the guitar. Jean’s best times were those spent with her family at the family camp on Boyden Lake. She always felt her greatest accomplishment was her three children. Jean was known for her love and admiration of her children.

In addition to her parents, she was predeceased by several brothers and sisters; and her son-in-law Edward Seeley. Surviving are her three children, Diane Seeley of Charlotte, Tommy Hayward and wife Nokomis of Scarborough, and Clinton Hayward of Sidney; grandchildren, Taylor Hayward of Scarborough, Samantha Hayward of Sidney, and Megan Grenier of Sidney; two step-grandchildren, Stephanie Seeley-Bishop and husband Taylor of Hermon, and Andrew Seeley of Manchester, NH; two step-great grandchildren, Lydia and Myla Bishop; siblings Margaret Strickland of Saint Johns, NFLD, Rose Marie Wheeler of Montreal, QC, and Thomas Wheeler of Kitchener, ON; special niece Pauline Burrill of Brewer; her roommate and dear friend, Dot Edgerly; and numerous nieces and nephews.

In keeping with Jean’s wishes, there will be no formal service. A private Celebration of Life will be held in the summer at the family camp on Boyden Lake. Arrangements by Mays Funeral Home, Calais & Eastport.
To order memorial trees or send flowers to the family in memory of Jean Ada Hayward (Wheeler), please visit our flower store.