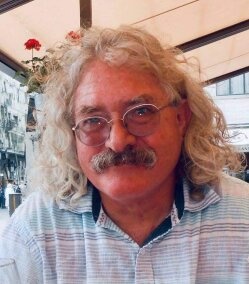 Perry - Jay passed away at EMMC on January 28, 2021 after a courageous battle with complications from lung cancer with his wife and son at his side.

He was born on October 20, 1952 to Jean (Sawyer) and Richard Skriletz in Minneapolis, MN, but moved to Manhattan Beach, California as a young child. As a teen, he had an affinity for acting and all things, theater and began his studies at University of California.

Amid his legendary stories of train hopping and teepee living in the West, Jay found his life driven and inspired by the arts.

He graduated with a BA and MA with distinction in Theater from University of Maine, Orono.

Jay was a gifted director, designer and actor. With a career spanning more than 50 years, his work is too numerous to list, however he was most proud of Life During Wartime (Arnold Colbath Award), Angels in America, Inspecting Carol, A Flea in Her Ear, The Fantastics, and Fiddler on the Roof (Moss Hart Award). Over the last decade, he focused his energy on playwriting including Indifference and Houdini’s Secret. He was currently working on Pandora’s Juke Box.
Jay loved music and sang and played multiple instruments including the accordion and ukulele, the latter which was never out of his reach. He was a member of the UMM Ukelele club.

Jay was well known by close family and friends as a talented culinary artist with a taste for unique dishes that surprised and delighted, most noted, pork szekler, chicken paprikash, nanitorte and walnut cookies.

When Jay’s life wasn’t consumed by his passion for theater, he found himself working in lead mining in Leadville, Colorado, clam digging in Machiasport, carpentry in Perry, salmon farming in Eastport and in the last decades found joy in advocating for youth and was employed in Maine Migrant Education and various Prevention and Service Learning programs from 2005-2019. His intellect and passion for justice was well respected and using dedication and creativity to overcome obstacles for his clients.

A celebration of Jay’s life will be held in the spring. Donations in his memory may be made to Sarah’s House of Holden or a charity of your choice. Arrangements by Mays Funeral Home, Calais & Eastport.
To order memorial trees or send flowers to the family in memory of Jay Howard Skriletz, please visit our flower store.