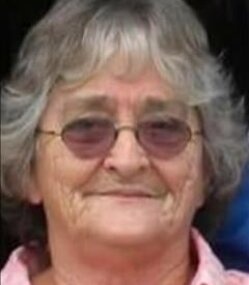 Perry – Janet Louise McPhail, 75, passed away at home surrounded by her family on Monday, January 3, 2022. Janet was born in Eastport on December 23, 1946, daughter of Emery “Spike” and Frances (Rodgers) McPhail.

Janet attended Shead High School until marrying her love, Lewis McPhail at the age of 15 on December 22, 1962. Over the years she worked at Webster Valve in New Hampshire, an eyeglass place in MA, and cleaned for various hotels wherever Lewis was staying while working on the road. Her biggest job and one she loved the most was raising their six children. Janet was all about taking care of the needs of her family. She enjoyed going to the greyhound and harness races, casinos, playing bingo, and taking her grandchildren shopping.

In addition to her parents, Janet was predeceased by an infant sister Helen; and a brother Douglas McPhail I. Surviving are her husband of 59 years, Lewis McPhail ; their six children, Nancy O’Rourke and husband Chris of South Carolina, Gary McPhail and wife Joyce of New Hampshire, Larry McPhail and wife Heather of New Hampshire, Jerry McPhail and companion Jana Craig of Perry, Susan Ward and husband Michael of Dennysville, and Chad McPahil and wife Jody of Perry; grandchildren, Ryan Bacon and wife Lilly of NH, Jessica Bacon of NH, Emily O’Rourke of NH, Adam McPhail of NH, Shayla McPhail of NH, Cassandra McPhail of FL, Tommy Collins of Calais, Amanda Ward and companion Jake Randall of Calais, Bradley Ward of Robbinston, Mason Dickey of Perry, and Trista Cornelius Hendrickson of WI; great-grandchildren, Benjamin Bacon of NH, Braxton Randall of Calais, and Korbin Hendrickson of WI; siblings, Richard McPhail and wife Nancy of Lewiston, Harold McPhail of Perry, Ernest McPhail and wife Franny of NC, William McPhail of Rumford, and Patricia Cline of NH; a sister-in-law Shirley Loranger of NH; and many nieces and nephews.

In keeping with Janet’s wishes, there will be no services. Arrangements by Mays Funeral Home, Calais & Eastport.
To order memorial trees or send flowers to the family in memory of Janet Louise McPhail, please visit our flower store.