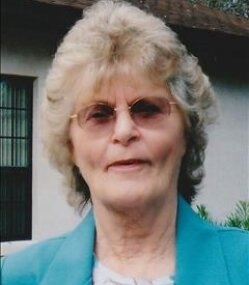 Cooper – Janet Catherine Ketchen, 86, passed away with family by her side on Thursday, February 3, 2022 at Marshall’s Health Care Facility in Machias. Janet was born in Middletown, CT on July 20, 1935, daughter of Robert and Lillian (Sherman) Day.

Janet graduated from Middletown High School, Class of 1953. She worked as a telephone operator in Connecticut and in August 1957, married her love, Raymond Ketchen in Windsor. They eventually moved to Cooper where they grew vegetables. Initially they sold their vegetables at market gardens and started Ketchen’s Greenhouse, selling produce locally and to grocery stores in Calais and Machias for over 20 years. During this time, Janet also started working for the U.S. Postal Service, later becoming the Postmaster in Cooper. Janet and Ray slowly phased out the greenhouse and owned and operated Ray’s Country Store in Cooper until retiring in the late 1990’s.

Janet enjoyed fishing, gardening, attending various music and other festivals, and visiting with friends she made over the years. After the death of her beloved husband of 42 years, she enjoyed wintering in Florida with her friend and companion Vincent Dineen.

In addition to her parents, Janet was predeceased by her husband Raymond; sisters Shirley Day, Mildred Pilch, and Nellie Cooper; brothers Robert, George and James Day; and a special nephew Jeffrey Guire. Surviving are her four children, Michael Ketchen and wife Diana of Murfreesboro, TN, Benjamin Ketchen and wife Rena of Perkinston, MS, Timothy Ketchen and wife Kelly of Cooper, ME, and Karen Gonnet and husband Yves of Huntington, VT; nine grandchildren; nine great-grandchildren; brother Ronald “Slim” Day of Middletown, CT; many nieces and nephews; and her dear friend and companion of 20 years, Vincent Dineen of Meddybemps, ME.

The family wishes to thank the staff at Marshall’s Health Care Facility in Machias for going above and beyond with the excellent care given to Janet.

A Celebration of Janet’s Life will be held in the summer. Arrangements by Mays Funeral Home, Calais & Eastport.

To order memorial trees or send flowers to the family in memory of Janet Catherine Ketchen, please visit our flower store.