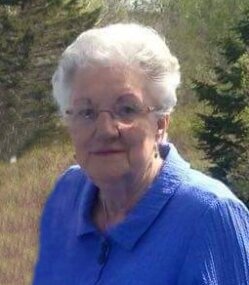 Jane graduated from Pembroke High School and attended Eastern Maine General Hospital School of Nursing. She helped her parents in the family upholstery business until marrying Delman Morgan in 1954. After marrying Delman, she was a dedicated mother to her four children. Jane was a member of People’s United Methodist Church in Pembroke and was an active hospice volunteer and member of the Pembroke Fireman’s Auxiliary. She enjoyed knitting, braiding rugs, jigsaw and crossword puzzles, and going for walks.

In keeping with Jane’s wishes, there will be no services. Arrangements by Mays Funeral Home, Calais & Eastport.
To order memorial trees or send flowers to the family in memory of Jane Marie Morgan (Small), please visit our flower store.