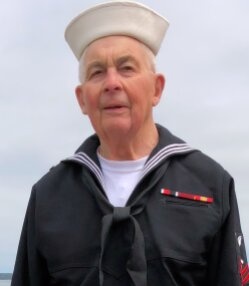 Eastport - James Hillman Spinney, 90, died peacefully at home on October 27th, with family by his side. James was born at home in Perry on July 23, 1930 to Roy and Elizabeth (Clark) Spinney. He attended the Back District one-room schoolhouse, the Brick School House, and graduated from Shead Memorial High School with the class of 1947.

Jim met Shirley Creamer at Shead and asked her out to a basketball game. White fur from the muff she was holding got all over his coat, and they went steady after that. Jim went on to the Maine Vocational Technical Institute to study his lifelong interest, automotive engineering. After graduating he returned to Eastport to work at Matton's Garage, before enlisting in the Navy just hours before his draft card arrived in the mail. On leave from boot camp, Jim and Shirley were married with only two weeks' notice. Their honeymoon included a breakdown on Route 1 outside of Boston during rush hour.

He served on three destroyers during the Korean War period, in the Mediterranean and Cuba. He left the Navy as an IC2. Son Ron was born while Jim was in the service, and Jim and Shirley first set up household in Machias where he worked at Rier Buick.

Jim came home to work at Cummings Garage in Eastport and bought the business after twenty years. He ran it for 37 years, retiring on his birthday. Being located near downtown, he got to know many people, residents, and tourists, who recall his kindness. Jim loved to tell stories of his experiences, and in later years enjoyed taking photographs everywhere he went. He loved to visit family and often arrived on short notice because he wanted no fuss.

Working as a mechanic only came natural to Jim, as from childhood he took door handles apart, played with nuts and bolts, and tinkered with anything mechanical. He was given an old 1926 Model T before he could drive and went on to win many prizes for his restored antique cars. He passed on his love of old cars, and one year three generations of Spinneys drove Model Ts in the Fourth of July parade.

Jim was a member of Cornerstone Baptist Church, previously Washington Street Baptist Church. He served as Deacon and was a devout Christian, having first joined the Perry Baptist Church as a child. He was also a member and past master of Eastern Lodge #7 AF & AM and of the VFW. He served on the Eastport school board for three years, and in the Eastport Volunteer Fire Department for ten years.

In addition to his parents, Jim was predeceased by his beloved wife of 64 years, Shirley Spinney; his brothers Roy, John, Charles Loud, Edward Loud and his sister Frances Caler; and cousins Dale Lincoln and David Lincoln.

Visitation will be held from 6:00 - 8:00 pm, Friday, June 18th at Cornerstone Baptist Church, County Rd., Eastport. A memorial service will begin at 2:00 pm, Saturday, June 19th at Cornerstone Baptist Church with burial to follow at Restlawn Cemetery in Perry. Donations can be made to the Eastport Labor of Love Food Pantry, 137 County Rd., Eastport, ME 04631. Arrangements by Mays Funeral Home, Calais & Eastport.

To order memorial trees or send flowers to the family in memory of James H. Spinney, please visit our flower store.