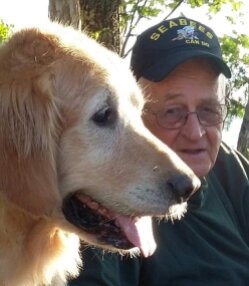 Baileyville – James Benjamin Mann, 81, passed away peacefully on January 22, 2020 at the Maine Veteran’s Home in Bangor. Jim was born in Greenville to Floyd and Doris (Jones) Mann on January 16, 1939. As a young man he attended Woodland High School and graduated with the Class of ’57. He soon after enlisted with the United States Navy and proudly served with the Seabees. Following his service Jim returned to Maine and attended Southern Maine Technical Institute where he studied Machine Tool Technology.

Jim put his degree to good use during his career with Georgia Pacific in Baileyville where he worked from 1965 until his retirement. In 1967 Jim married Marie (Sullivan) McGraw, together they shared 35 years of marriage until her passing in 2003. In 2008 Jim married Deborah (Fleming) Hatch.

Jim was a member of the Peoples United Methodist Church of Baileyville, The Princeton Rod & Gun Club, American Legion William T. Wren Lodge in Baileyville and the American Legion Lewey Island Lodge in Princeton. He enjoyed gardening and wood working in his spare time and loved taking trips to the School House Restaurant in Princeton for coffee or ice cream.

In addition to his parents and his first wife, Jim was predeceased by his stepson, Thomas McGraw; two brothers, Richard and Harold Mann and his two best canine friends, Tucker and Gracie. Surviving are his wife, Deborah Mann; four daughters, Sharon Nelson of Baileyville, Debbie McGraw and her companion Fred Rowe of Etna, Sue Mahar and her husband Ron of Baileyville and Gloria Creamer of Miramichi, Canada; stepdaughters, Holly Hatch and her companion Tim Rogers of Dixmont and Heather Hatch and her husband Todd Winmill of CA; his brother, Eddy Lynch; special cousins Jeanne and Dick Emmons and Joanne Vance; best friend, Bill Roehrich and many grandchildren and great grandchildren whom he loved endlessly.

A remembrance service in honor of Jim will be announced in the spring. In addition to the support from family and friends, Jim’s family would like to thank Maine Veteran’s Home of Bangor, Beacon Hospice, Cancer Care of Maine and St. Croix Regional Family Health Center for their wonderful care. Donations in Jim’s memory may be made to Shriner’s Children Hospital Burn Center at shrinershospitalsforchildren.org, or a charity of one’s choice. Arrangements by Mays Funeral Home, Calais & Eastport.

To order memorial trees or send flowers to the family in memory of James B. Mann, please visit our flower store.