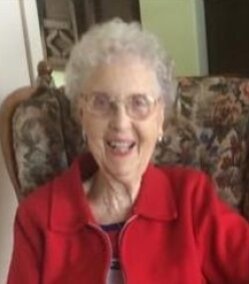 Eastport – Inez Louise Segien, 97, died on Sunday, Father’s Day, June 20, 2021 at the place she called home for the last eleven years surrounded by the ones she loved. Inez was born in Eastport on March 13, 1924, daughter of Helen (Morrison) and Harold West Robinson.

She attended Eastport Schools and at an early age left Eastport to work in the Waltham Watch Factory in Massachusetts. She met her husband there, James E. Segien Sr. and they were united in marriage on September 26, 1942. James was serving in the United States Marine Corps and was sent to Bremerton, Washington where Inez followed. In 1945 she returned to Eastport and James returned after his discharge.

She worked at Harris Cabins after her retirement until her 80’s. Inez was one of the first members of the Eastport Memorial Nursing Home Auxiliary and served all her remaining years. She was a member of the Senior Citizen Center, served on the Eastport Health Center board, volunteered for the American Red Cross, Salvation Army and Goodwill. She was a member of the V.F.W. Ladies Auxiliary and Senior Companions. She was a devoted member of the Washington Street Baptist Church where she taught Sunday School for years. She picked up children all over the island, brought them to Sunday School and delivered them back home. She was the oldest member of Cornerstone Baptist Church.

If you know our Mother you know she loved to send cards to everyone, birthday, anniversary, get well, sympathy, weddings, births or thinking of you. Inie would be sending you some love!! Pass it on. Send someone a card today.

A graveside service will be held 11 a.m. Saturday, July 3, 2021 at Bayside Cemetery in Eastport. A Celebration of Life will follow at the Cornerstone Baptist Church in Eastport. Arrangements by Mays Funeral Home, Calais & Eastport.

To order memorial trees or send flowers to the family in memory of Inez Louise Segien, please visit our flower store.