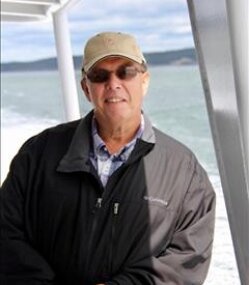 Pleasant Point - On November 13, 2021, with his wife of forty years by his side, Herman Joseph Fortin left this world and his legacy behind. Herm had been fighting esophageal cancer for more than a year before his passing.

Herman was born on June 24, 1958 to Aldrie and Marietta Fortin of Lille, Maine. The oldest of four farm boys, he grew up helping his father and uncle on the family potato farm, taking care of the animals, canning food with his mom, and driving truck. The farming work ethic stayed with Herman throughout his career.

After graduating from Van Buren High School in 1976, Herman enlisted in the U.S. Army. Throughout his three years in the service, Herman rose to the rank of Sargent, working as a carpentry and masonry specialist and later driving high ranking officers as a motor transport operator. Herm ended his service overseas in Germany in 1979.

In the years following, Herman met the love of his life, Martina, at Northern Maine Vocational Technical Institute in Presque Isle. The two graduated and relocated to southern Maine, where Herm began work as a pipefitter at Bath Iron Works. Living in Topsham, they had their two sons, Matthew and Brian. On a whim, Herm took his postal exam and landed a clerking job at the Presque Isle Post Office.

For twenty years, Herman was a fixture in the Presque Isle community, serving as an active member of the Knights of Columbus at St. Mary’s Parish, as Cubmaster for his sons’ Cub Scout pack, as a volunteer in Athletic Boosters, and as a member of the Presque Isle Country Club. Despite being so busy, Herm rose to the level of Postmaster, managing offices in Perham, Easton, and Perry.

Herman was a skilled cook, and nothing gave him more joy than cooking with his grandchildren, Abram and Annabelle. Throughout their marriage, Herm and Martina were avid campers, culminating in a 2018 cross-country trip, a lifelong dream for both. In his retirement years, Herman grew his garden by day and took his friends’ poker money by night.

Visiting hours will be held at 26 Wekosos Lane, Pleasant Point, Maine starting at 12:00pm on Friday, November 19, 2021. A Mass of Christian Burial will be celebrated 11 a.m. Saturday, November 20 at Immaculate Conception Church in Calais with procession and burial at Pleasant Point immediately following. In lieu of flowers, please consider donating to Sarah’s House at sarahshouseofmaine.org. Arrangements by Mays Funeral Home, Calais & Eastport. Condolences and memories may be shared at

www.MaysFuneralHome.com
To order memorial trees or send flowers to the family in memory of Herman Joseph Fortin, please visit our flower store.