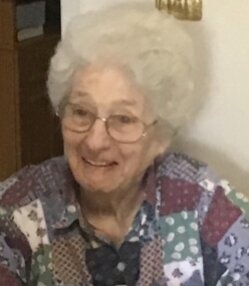 Helen graduated from McAdam High School, Class of 1946. She worked in a local grocery store until marrying Hollis Beer on February 16, 1949. They settled in Vanceboro where they raised their children and owned and operated Holly’s General Store from 1952 until retiring in 2005. She was a member of the Vanceboro United Methodist Church and the Vanceboro American Legion Auxiliary. She enjoyed playing Bingo and knitting, making mittens for nearly every child in town.

In addition to her parents, Helen was predeceased by her three sisters, Phyllis, Guyda and Jean. Surviving are her husband of 71 years, Hollis Beers of Vanceboro; four children, Linda Weymouth and husband Bill of Augusta, David Beers and wife Cathy of St. Croix, NB, Danny Beers of Vanceboro, and Michael Beers of Princeton; five grandchildren, Mark Weymouth and wife Melissa of Rozet, WY, Holly Lynn Beers of McAdam, NB, Amanda Cleghorn and husband David of Ontario, Ryan Beers and wife Mikayla of Topsfield, and Shaye Beers of Baileyville; 10 great-grandchildren; and many nieces and nephews.

Due to COVID restrictions, a Celebration of Helen’s Life will be held in the spring. Arrangements by Mays Funeral Home, Calais & Eastport.
To order memorial trees or send flowers to the family in memory of Helen Marjorie Beers (Short), please visit our flower store.