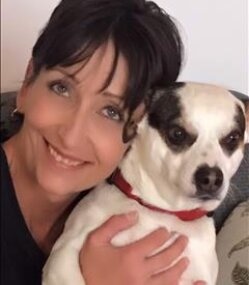 Eastport – Heather Marie Morrison, 51, passed away Thursday, June 30, 2022 surrounded by her loving family after a long and courageous battle with Non-Hodgkin’s Lymphoma. Heather was born October 13, 1970 in Calais, ME, daughter of Sanford “Sandy” and Jean (Emery) Morrison.

Heather graduated from Shead High School where she excelled in sports; especially softball and earned many awards for her pitching skills. She was offered a softball scholarship at St. Joseph’s College but chose to attend University of Maine Orono for a year and a half. Heather married Kevin Malloch and they moved to California where she started her own life insurance business, Acacia Insurance. After ten years Heather moved back home to be closer with family. She had a big heart, and her world was family, friends and animals, especially her beloved dog “Pinto”. She enjoyed many camping trips with family and friends at Grand Lake Stream, Robinson’s Cottages and Moosehead Lake.

Heather was predeceased by her brother Stephen; grandparents Maurice and Pauline Emery, and Francis and Kathleen Morrison; uncles Gary and Francis “Brow” Morrison; and aunts Joan Bruneau and Brenda Bowley. She is survived by her loving parents, Sanford “Sandy” and Jean Morrison; a brother Sanford “Sandy” Morrison and wife Paula; special aunts and uncles, Janet and Jim Haldeman, Heather Morrison, Betty Morrison, and John and Ginny Emery; special niece and nephew, Vicki Nadeau and husband Luke, and Stephen Morrison and wife Paige; many cousins and friends, all who have supported Heather and her family throughout her battle with cancer.

A Celebration of Heather’s Life will be held 3:30 p.m. Saturday, July 9, 2022 at Blakey Memorial United Methodist Church, 74 High St., Eastport. A private burial will take place in Hillside Cemetery. In lieu of flowers, donations in Heather’s memory may be made to either the Stephen Morrison Scholarship Fund at Shead High School in Eastport, ME, or the Blakey Memorial United Methodist Church Roof Fund, Eastport, ME. Arrangements by Mays Funeral Home, Calais & Eastport.

To order memorial trees or send flowers to the family in memory of Heather Marie Morrison, please visit our flower store.