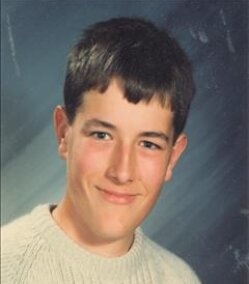 Calais - Harvard Alan Peterson, 43, passed away on September 17, 2021 after a month-long illness. Harvard was born at the Oak Knoll Naval Hospital in Oakland, CA on December 11, 1977, son of Paul and Carol (Salisbury) Peterson. Harvard was a graduate of Calais High School and Washington County Community College, earning his Associates Degree in Informational Technology.

Harvard was known by many as “The Walker”c for the past 20 years he was often to be seen walking down the River Road in the Red Beach and Robbinston communities, wearing a straw hat and waving at the passing cars. He tried to greet everyone with a smile and his desire that the blessings of God will be upon all.

Harvard is survived by his father, Paul A Peterson, his mother, Carol Ann (Salisbury) Peterson, and 4 siblings, George (42), Mark (37), Kenneth (32) and Chance (27). He was an active member of the Church of Jesus Christ of Latter-Day Saints in good standing and volunteered with their Primary program for young children. He never married and has no offspring.

Services for Harvard will be held 6 p.m. E.S.T. Friday, September 24, 2021 at the Sant Stephen Chapel Of the Church of Jesus Christ of Latter Saints and over zoom at the home of Scott Hollander 293 Gin Cove Road, Perry Maine. Arrangements by Mays Funeral Home, Calais & Eastport.

To order memorial trees or send flowers to the family in memory of Harvard Alan Peterson, please visit our flower store.