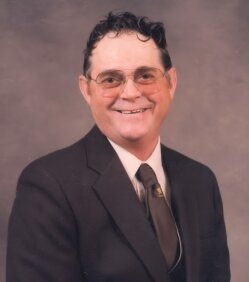 Harry’s family relocated to Boston from Dennysville during the depression to find work but returned in 1942. After attending a one room schoolhouse in Edmunds and then Dennysville High School, Harry joined the Navy at age 17. He served as a Boatswain on the battleship USS Mississippi, which gave him the opportunity to "see the world", but his most memorable visit was to his homeport of Norfolk, VA where he met his beloved Lorraine “Bertie” Sevy. Three months later they married on June 12, 1954 and together, they moved to Dennysville, Maine in 1956. Early on Harry worked for the State of Maine Highway Dept., he cut and sold wood, and dug clams before taking a position with Georgia Pacific in 1965 from which he retired in 1987 as Maintenance Supervisor.

When asked about his life, Harry kept it simple, explaining that for him and Lorraine, it was love at first sight. They always did things together, whether it be yard saling, visiting antique stores to look for glass pieces to collect or spending time with their family. He noted that there have been good times, adventurous times, but also some hard times.

Harry was a communicant of St. John’s RC Church for 70 years and a devout Catholic. Above all, he was a family man. He loved to hunt, fish, and go camping, but his children and grandchildren were always first.

Due to Covid-19 restrictions, visitation will be limited to family members only. A public funeral service will be held at 11:00 am on Saturday, May 22 at St. John's RC Church in Pembroke. Committal will follow at Dennysville Cemetery. Arrangements by Mays Funeral Home, Calais & Eastport.
To order memorial trees or send flowers to the family in memory of Harry Walter Jamieson, please visit our flower store.