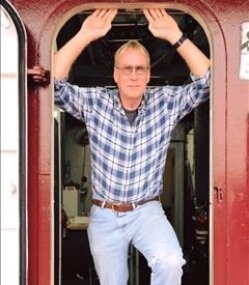 Milford, DE – Captain Harry Christian Andersen, 63, passed away suddenly from a heart attack on Thursday, April 21, 2022 in Eastport, Maine. Harry was born in Wilmington, Delaware, on May 22, 1958, son of Kenneth C. Andersen and Margaret Tigue Andersen.

At the age of 14, Harry began a career on water that would carry him to oceans and inland waterways over the next five decades. His journey began as a deckhand in Ocean City, Maryland, working for Captain Jack Bunting on the fishing boat, the Angler. Because of his dedication and abilities, Harry earned the respect and friendship of all he met. In time, he changed his profession from fishing to tugboats and moved up to the rank of Captain. He worked with Bouchard Towing for 20 years, and most recently with Moran Towing, providing marine transportation services for international commerce. Not only was Harry licensed as a Master Merchant Seaman, but he also attained mastery in Advanced Oil and Chemical Tanker Cargo Operations, Medical First-Aid, Person in Charge of Medical Care, Advanced Firefighting and Basic Training.

Harry had a relentlessly inquisitive nature and brilliant intellect which led to a life rich with adventure and interests. He belonged to the Rehoboth Beach Sailing Association and the Sussex Cyclists. He was an avid ham radio enthusiast and proud member of the Federal Communications Amateur Radio Association. Harry loved the outdoors and enjoyed camping at various National Parks. He also had a passion for photography. He could frequently be found “tinkering” and seemed to always have a different project going which allowed him to spend quality time with his family and friends.

Harry belonged to the Religious Society of Friends and was a deeply faithful member of Camden Friends Meetinghouse. He loved his friends there and was honored to be of service to the congregation, tending to the building with great pride and ingenuity. The values of his faith (simplicity, peace, integrity, community, equality, and stewardship) extended to everything he did in his life.

Forty years ago, Harry met and fell in love with his wife, Patricia Natrin, and they were united in marriage on October 5, 1985. They sustained a close and loving relationship through times of challenge and joy, and were excitedly looking forward to retiring to land Harry had purchased in the most eastern city in the United States: Eastport, Maine. It was in this gorgeous place, on a beautiful morning, in a wonderful mood and talking with an old friend, that Harry was called home.

A memorial service will be held at 2 p.m. Saturday, April 30, 2022 at the Camden Friends Meetinghouse, 122 East Camden-Wyoming Ave, Camden, Delaware, 19934. Following the service, a time of fellowship will be held at the Gathering Place. Arrangements by Mays Funeral Home, Calais & Eastport.

To order memorial trees or send flowers to the family in memory of Harry Christian Andersen, please visit our flower store.