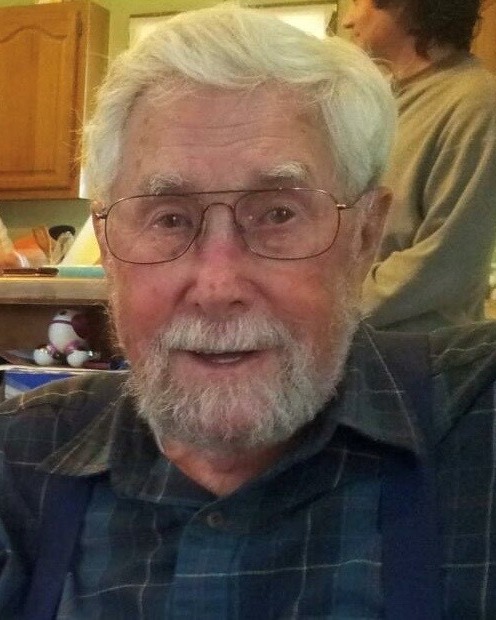 Marshfield - Harlan Hadley Gardner, 100, was as kind and gentle a man as one might ever know.  He had his last baked bean supper last Saturday night and slipped away just a few crisp, fall mornings later in a home filled with love, kindness, laughter and song.

Even as his memory faded and he could not recall the birth rank of his three siblings and himself, he could recite from memory every action noted in his flight journal.  Although a pacifist at heart, he joined the Marines after the bombing of Pearl Harbor and trained for the Marine Torpedo Bombing Squadron 131 as a radio man and tail gunner.  “We arrived in Guam on August 13, 1944, flew off-shore anti-submarine patrols for eight months, flew to Ie Shima (Okinawa) on May 29, 1945 and made over 150 supply drops to the First Marine and Seventy-seventh Army Divisions”. The VMTB was awarded a Presidential Unit Citation for their action and participating air crews received the Air Medal.

With two area lakes named after his family (Gardner and Hadley, but, thankfully, not Bog), Harlan Hadley Gardner (a.k.a. “Gramp”) had a deep tap-root in Washington County, Maine.  He and his wife Dottie built a house and raised their two daughters Cindy and Cathy just up the road from the house in which he was born in Marshfield.  As Dot was from Machias, he liked to say, “I married a city girl”.

He was an RFD mail carrier for nearly thirty years and, upon retiring, became a faithful babysitter for his four grandkids.

A champion of fairness and equality, Harlan Gardner was pivotal in the fight for Marriage Equality in Maine and elsewhere when he, along with his family, was featured in a television commercial saying, “I don’t see how anyone who has been in combat could ever be cruel to anyone ever again”.

The family is extremely grateful to the staff of Down East Hospice Volunteers and Community Health and Counseling Hospice Program for their loving, caring support.

At Harlan’s request, there will be no funeral.  Arrangements by Mays Funeral Home Calais & Eastport.

In lieu of flowers, donations may be made to Maine Family Planning (online at mainefamilyplanning.org) or by mail to Maine Family Planning, P. O. Box 587, Augusta, ME  04332 (Please designate, “to support the program of greatest need in Washington County.”); or to Down East Hospice Volunteers (online at downeasthospicevolunteers.org) or by mail to Down East Hospice Volunteers, 11 Hospital Drive, Machias, ME  04654.

To order memorial trees or send flowers to the family in memory of Harlan H. Gardner, please visit our flower store.