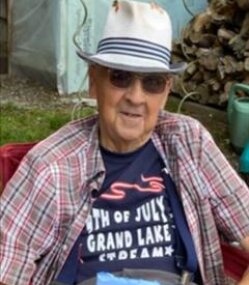 “You Are Our Sunshine”

Princeton – Guel Marlin Roberts, the World’s Greatest Junker, passed away peacefully at home on November 25, 2021 with his loving wife by his side. Guel was born on October 9, 1938 in Wesley on top of Day Hill to Milton and Muriel Roberts. He grew up in Wesley where he attended school before leaving to go to work in the woods and various other jobs.

Guel spent two years in the U.S. Army and saw much of the country, serving with Co. B 7th Engineer Battalion. He was days away from being sent to Cuba during the Cuban Missile Crisis, forever making JFK his favorite president.

Guel and his wife Gertrude McLellan Bailey, were married on July 27, 1974, and combined their two families to raise their five daughters, Linda, Darlene, Sandy, Lori and Trina. He worked for the GP Wood Division until it closed, and then worked for private companies. He spent many years as the dump attendant at the Grand Lake Stream & Princeton Transfer Stations where he gave lollipops to all the kids who rode with their parents. He also kept a stash of lollipops in all of his vehicles to hand to kids wherever he saw them.

After retiring, Guel and Gertrude spent much of their time traveling throughout the state and stopping at various yard sales and antique stores where he collected “treasures” for Guel’s Museum. Guel would be often seen walking his 1 and 6/10ths of a mile each day which he took much pride in. Guel was a proud veteran and member of the Georgia Pacific Quarter Century Club, Princeton Vol. Fire Dept during the 60’s and 70’s, and served as a Constable for Plantation 21 in the early 70’s.

Guel’s proudest moments were when his 12 grandchildren were born; Amanda, Angela, Patrick and Samantha, Ben and Katie, Chad and Kyle, Matthew, Meagan, Michael and Luke. He loved to brag about his 27 great-grandchildren.

Special thanks to Tara Dwelley, FNP, and Erica Pike, FNP for their great care given to Guel.

In keeping with Guel’s wishes, there will be no services. Arrangements by Mays Funeral Home, Calais & Eastport. Condolences and memories may be shared at www.MaysFuneralHome.com
To order memorial trees or send flowers to the family in memory of Guel Marlin Roberts, please visit our flower store.