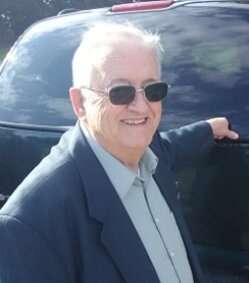 Eastport – Gordon Lee Smith, 80, passed away on November 4, 2019 at a Bangor Hospital. Gordon was born on July 10, 1939 to Holland and Joan (Sharpe) Smith and his childhood was spent in Westbrook where he graduated from Westbrook High School, Class of 1958.

Soon after high school Gordon enlisted with the Air National Guard and also took a position with Mohawk Airlines, of upstate New York where he resided for 10 years. On October 2, 1964 he married Rose Murphy, the woman with whom he’d spend the rest of his life. He and Rose eventually relocated to Saco where they raised their family while Gordon took a position with Delta Airlines in Portland and dedicated 25 years of service. After retirement he and Rose relocated to Eastport where they’ve been for the last 13 years.

Gordon was a bright man, he was intrigued by the history of WWII from a young age, particularly the aircrafts used during that era. That fascination continued throughout his life, but he also enjoyed science and spent a great deal of time doing research as the family’s genealogist. His family will always appreciate his sense of humor, he could make one either laugh or cringe with his endless supply of puns and jokes.

Gordon was predeceased by his parents. He will be fondly remembered by his wife, Rose M. Smith; two children, Erik Smith and his wife, Denise of Saco and Kristin Boyd of Standish; four grandchildren, Amelia Smith, Liam Smith, Azarie Sims and her husband Andre and Ethan Boyd; step grandsons, Anthony, Garrett and PJ; a step great granddaughter, Addison; his sister, Marjorie Grant and several nieces and nephews.

Visitation will be held from 1:00 – 2:00 pm on Saturday, November 9th at Mays Funeral Home, 26 Church St., Calais. A funeral will begin just following visitation, at 2:00 pm, Saturday November 9th at the funeral home with his niece, Rev. Dr. Wendy Jones officiating. All are welcome to join Gordon’s family after the funeral at St. Anne’s Episcopal Church, 29 Church St., Calais for a luncheon. A private burial will take place at Dennysville Cemetery.

To order memorial trees or send flowers to the family in memory of Gordon Lee Smith, please visit our flower store.