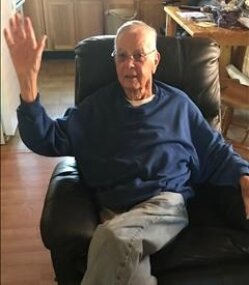 Lincoln – Gerald Bruce “Mugsy” McLaughlin, 87, passed away peacefully Saturday, September 18, 2021 at his Lincoln home holding his daughter Marilyn’s hand. He was born in Lincoln on September 22, 1933, son of Robert and Blanche (McCafferty) McLaughlin.

Mugsy was a proud frontline Infantryman U.S. Marine who served in the Korean War. During his service he earned two Purple Heart Medals and received a Letter of Commendation “V” for Valor. He was a retired Ironworker from Local 496. Mugsy loved his country and his freedom. He had a colorful life for all that knew him. All his stories he told were true and quite unbelievable. Mugsy never lost his audiences attention due to explicit fine detail. He was a caring man especially to those in need. Mugsy would quite often give his last dollar in his pocket then wait for payday, saying “I have back-up, The Man”. He loved his freedom to drive, where he was always at peace – it was his safe haven.

Mugsy is survived by three daughters, Marilyn Blethen and husband Jeff “The Man” of Lincoln and Venice, FL, Darby Vique and husband Eric of Venice, FL, and Heidi Burbanker and husband Adam of CA; adopted son Clark McLaughlin of ME; and several grandchildren.

In keeping with Mugsy’s wishes, there will be no services. Arrangements by Mays Funeral Home, Calais & Eastport.

To order memorial trees or send flowers to the family in memory of Gerald Bruce McLaughlin, please visit our flower store.