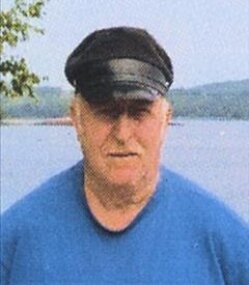 George attended school in Red Beach, Milltown and Calais, leaving at an early age to help support the family. He worked by fishing, lobstering and clamming, and at the local sardine factory and woolen mill in Eastport. George started working in the construction field initially for DiCenzo Construction, and later helped build the Woodland High School gymnasium. Eventually he started his 43 years career with Lane Construction. During the winters George plowed snow for Baileyville Public Works for 15 years, Alvah Cousins Plowing, and Scottway Oil. George believed in working hard and staying active. Following his retirement at the age of 73, he worked for William Bros. Paving, Rollins Construction and T.P. Drew Construction. He loved the outdoors and enjoyed hunting, fishing and tinkering with cars. George was the type of person who would do anything he could to help someone in need.

In addition to his parents, George was predeceased by his first wife Mary Lou Leighton and their son John; and siblings Raymond, Margaret, William and Douglas. Surviving are his wife Carmen (Polk) Small of Robbinston; two children, Georgia Haley and husband Mark of St. Stephen, NB, and Howard Small and wife Shannon of Baileyville; the mother of his children Paula Small of Eddington; grandson Mark Joseph “MJ” Haley and wife Kaitlyn of Hampton, NB; stepchildren, Staci Lawless of MI, Timothy Lawless of Robbinston, and Jordan McLellan and companion Tisha Robar of Baileyville; step-grandchildren Cadynce Amara and Theo Gordon of Baileyville; siblings Robert Small and wife Sandra of Calais, Diane Chalout of Biddeford, Wayne Small and wife Sondra of Jonesport, Beatrice Cheney and husband Clifford of Dennysville, and Wallace Small Jr. and wife Stacie of Lubec; sisters-in-law and brothers-in-law, Susan Small of Calais Lorrie Johnson of Baileyville, Philip and Cindy Polk of Princeton, Shelly Childress of Robbinston, Michael Polk of Eastport, Maurice and Addie Polk of Baring, and John Leighton of South Princeton; nephew who he thought of as a son Patrick Small and wife Tara of Calais; neighbor who was like a son Robert Ricker of Robbinston; many nieces, nephews and cousins; and a multitude of friends and acquaintances including special friends Robert McArthur of Alexander and Kevin Small of Dennysville.

George always had two sayings, “Don’t sweat the small things, because things happens”, and “Close Enough”. In the end, George did it his way.

A Celebration of George’s Life will be held 1 p.m. Friday, July 1, 2022, at Mays Funeral Home, 26 Church St., Calais. Burial will be at Red Beach Cemetery. Following the service, a gathering will be held at the Robbinston Grade School. Arrangements by Mays Funeral Home, Calais & Eastport.
To order memorial trees or send flowers to the family in memory of George Jarvis Small, please visit our flower store.