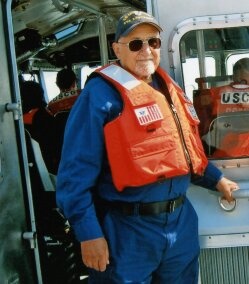 George worked for over 41 years for the NH Highway Department, starting as a surveyor and retiring from the Engineering/Design department. He retired to Lubec and later Pembroke, where he was a member of the Pembroke Historical Society. He joined the Coast Guard Auxiliary in Eastport at the age of 80 where he volunteered in the radio room and taught boater safety.

In addition to his parents, George was predeceased by his wife, Joan (Dierks) Richardson and his brother, Bruce Richardson.

In keeping with George’s wishes, there will not be a memorial service. He will be laid to rest beside his wife at Clarkside Cemetery in Pembroke. Arrangements by Mays Funeral Home, Calais & Eastport.

To order memorial trees or send flowers to the family in memory of George F. Richardson III, please visit our flower store.