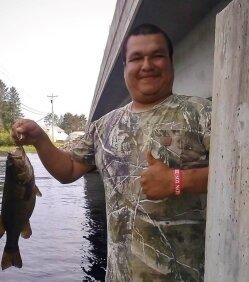 Presque Isle & Indian Township – Gary Francis Stevens II, 36, passed away at Northern Light Hospital in Presque Isle on January 10, 2021. Gary was born in Calais on September 16, 1984 to Garry and Donna (Sanipass) Stevens. He grew up at Indian Township and attended Lee Academy, graduating with the class of 2003.

Gary will be remembered for his love of his family, spending time with his fiancée and children, and the pride he took in his career as a foreman with Asplundh Tree company where he enjoyed working everyday with his best friend Jeremiah Smith, of Presque Isle. One of Gary’s first jobs in life was working alongside his dad in public works. Gary loved trees and the outdoors. He was an avid Star-Wars fanatic, enjoyed long Sunday drives with his family, and his mom’s cooking. He was always Cracking jokes to make people smile and laugh and was never one to back down from telling one of his stories, each time something was a little different and more heroic. He would do anything for anyone; that’s the kind of person he was. He was always taking care of others.

Gary was predeceased by his grandparents, George and Pauline Stevens and Donald and Mary Sanipass; a brother, Adam Romero; aunt Mary Ellen Stevens and uncles Augustine and Norman Stevens.

In addition to his parents, Gary is survived by his fiancée Sarah Nicholas, of Tobique First Nation, Presque Isle; five children, Komiwon Stevens of Indian Township, Violet Stevens of Canada, Brennen of Tobique First Nation, Pauline Stevens and Garry Stevens III both of Presque Isle; brothers Max Romero of Portland, George D. Stevens and Brian L. Stevens and his fiancée Cree, all of Indian Township; sister Lisa Sanipass Denny of Eskisoni; his aunts and uncles and several cousins, nieces and nephews. Gary was a friend to many.

Gary (Magoo) You are loved and will always be missed. Your legend will be carried on through your children ❤️

Visiting hours will be held at his father's home, 116 US Route 1, Indian Township starting noon Thursday, February 11, 2021 until Sunday, February 14.

To order memorial trees or send flowers to the family in memory of Gary F. Stevens II, please visit our flower store.