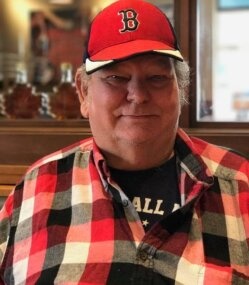 Crawford - Frederick Austin Wallace, 74, a lifelong resident of Crawford and Alexander, passed away unexpectedly at home on August 13, 2019. Freddie was born in Calais on May 14, 1945, the youngest child of Herman and Ethel (McArthur) Wallace.

He graduated from Calais Memorial High School in 1963. In 1966, he married the love of his life, Linda Sprague. They then welcomed their children, Jeffrey, Joseph, Tanya and Tracey. Through the years, Freddie was a jack of all trades, working hard to support his family. In the earlier years, he worked in the woods, but for the majority of his working years, he was self-employed doing construction work, plowing and sanding. He was known to say, “When in a fix, dial 7766”. He owned and operated Wallace’s Bus Service in Alexander for many years, retiring in 2016 when son Joe took the reins. In retirement, he had many health struggles, but his love and dedication for his family never wavered. Over the years, he has enjoyed playing many cribbage games with his family and at Randy’s Variety. Fred was a member and Past Master of Lewey’s Island Lodge #138 A.F. & A.M. in Princeton. He was a dedicated Red Sox fan (when they were winning), an avid viewer of RFDTV and the Game Show Network. However, his greatest joy came whenever he was surrounded by his family.

A celebration of Fred’s life will be held 11 a.m. Saturday, August 17, 2019 at the Alexander Cemetery. In lieu of flowers, donations may be made in his memory to the Alexander Volunteer Fire Department, 50 Cooper Rd., Alexander, ME 04694. Arrangements by Mays Funeral Home, Calais & Eastport.

To order memorial trees or send flowers to the family in memory of Frederick Austin Wallace, please visit our flower store.