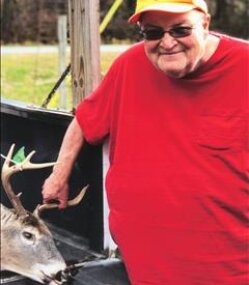 Frank graduated from Pitman High School in New Jersey and studied glass blowing at Salem Technical. While in college he met his love, Toby Anne Gegenheimer, and together they were united in marriage on November 26, 1966. Frank worked at Ace Glass in Vineland, NJ, retiring with over 30 years of service. After retirement, Frank and Toby Anne moved to Princeton to escape the humidity and enjoy the outdoors.

Frank was an avid outdoorsman and loved to hunt and fish. He also enjoyed restoring furniture, target shooting and watching NFL games. Frank attended People’s United Methodist Church in Baileyville and was a proud member of the NRA and the Menantico Gunning Club in New Jersey.

A graveside service will be held in the spring at the Princeton Cemetery, West St., Princeton. In lieu of flowers, donations in Frank’s memory may be made to the Passamaquoddy Rescue, PO Box 97, Princeton, ME 04668. Arrangements by Mays Funeral Home, Calais & Eastport.
To order memorial trees or send flowers to the family in memory of Frank William Peoples Jr., please visit our flower store.