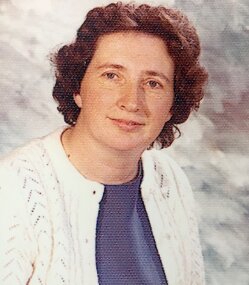 PERRY -- Frances Madeleine (Morrison) Raye, 92, died December 21, 2020, in Calais from complications after suffering a fall and hypothermia. She was born in Eastport, on June 25, 1928, the daughter of Floyd M. and J. Ruth (Bishop) Morrison. Her parents moved to Perry when she was a little girl, and she grew up spending countless happy hours at Bishop’s Store in North Perry, run by her grandparents, and at the Bishop family farm on Boyden Lake. She attended the one-room North Perry School, where she skipped two grades, and graduated from Shead Memorial High School in 1944, before her 16th birthday. She attended Washington State Normal School in Machias and began her teaching career in Eastport in 1948.

She was a born teacher who devoted her life to students in Eastport, Perry and Edmunds before retiring in 1993. She touched the lives of countless young people and enjoyed classroom visits for the rest of her life. In retirement, she loved to connect with her former students and enjoyed telling wide-eyed little children that she was in the 2nd grade for over 30 years, just to see the expression on their faces.

She loved animals and had a succession of dogs and cats throughout her life. A tireless worker and avid lifelong learner, she enjoyed many pastimes including puzzles, sewing, quilting, ceramics, woodworking, wallpapering, gardening and feeding songbirds. She learned photography and how to develop photos in a darkroom, built her own bathroom cabinets, made clothing including the wedding dresses of two of her daughters-in-law, and at one point kept a band saw on her kitchen counter.

Frances spent 90 summers at her cherished Boyden Lake, the last several of which she made her home there with her son Kevin and his wife Karen. Since 2016, she has been the holder of Perry’s Boston Post Cane, as the Town’s oldest citizen.

In retirement, she became an avid genealogist, tracing her ancestors back to the Revolutionary War and the Mayflower, and becoming a member of both the Daughters of the American Revolution and The Mayflower Society. She loved helping many other people trace their family genealogy and compiled an extensive collection of genealogical material that she put on permanent loan to the Tides Institute in Eastport so it can someday be made available to the public for research.

Along with her friends and fellow teachers Ruth McInnis and Alice Cates, she founded the Quoddy Crafts Shop in downtown Eastport in 1982 to fund the operation of the Barracks Museum in Eastport, of which she was the volunteer curator for many years. She served as President of both the Washington County Genealogical Society and the Border Historical Society in Eastport. She also served on many boards over the years, including those of Peavey Memorial Library, the Tides Institute, WINGS, a Washington County Adviser to the Eastern Area Agency on Aging, and as a member of both the Washington County Records Preservation Committee and the Washington County Courthouse Archives Committee. She was a devoted member of North Perry United Methodist Church, and served for many years as its Treasurer and Historian.

Due to the current Covid-19 pandemic, a memorial service celebrating Frances’s life will be at North Perry United Methodist Church with Pastor David Peterson and Tessa Chaffey Ftorek officiating, on her birthday, June 25, 2021, followed by interment at Restlawn Cemetery in Perry. Arrangements by Mays Funeral Home, Eastport and Calais. For those who wish, contributions in Frances’s memory may be made to North Perry United Methodist Church, P.O. Box 145, Perry, ME 04667.


To order memorial trees or send flowers to the family in memory of Frances M. Raye (Morrison), please visit our flower store.