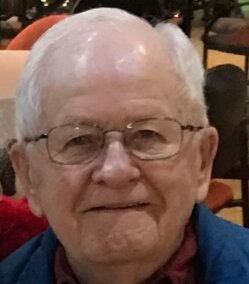 It is with great sorrow that we, Forest’s family, inform you that he passed away on Wednesday, May 12th. Dad began his life’s journey in Baileyville, Maine. After serving in the Army during World War II he finished his degree in mechanical engineering at the University of Maine. He married Mum (Theresa Orr) during his junior year. Work opportunities with US Steel and Reynolds Metal Company moved him and our family to PA, NJ, OH and eventually, Richmond, VA. Although he enjoyed work and was successful in his career, it paled in comparison to his love for Mum and us. When he and others were asked to submit their life accomplishments for a college reunion program, others listed job achievements. Dad wrote about raising a wonderful, loving family. His mantras as we were growing up were “if you’re going to do something, do it with enthusiasm” and “don’t be nice to other people because they’re nice, be nice to other people because you’re nice”.

From the first, in moving to Richmond, Forest was a member of Welborne United Methodist Church and remained so until his passing. He and Mum enjoyed many friendships and activities through the church.

In December of 2016, Theresa passed, and Forest moved into his apartment at Lakewood Retirement Community. There he was able to make many friends. He took part in the activities and all that Lakewood had to offer, but it was the people he enjoyed the most. Everyone was so kind to him and to all of us when we visited.

We hope that you will all remember him as being generous, thoughtful, and the comedian he thought he was!

We will be holding a graveside service for him at 11:00 am, Saturday, August 7, 2021, at Calais Cemetery. He will be home with Mum, where he always wanted to be. Arrangements by Mays Funeral Home, Calais & Eastport.

To order memorial trees or send flowers to the family in memory of Forest G. Peterson, please visit our flower store.