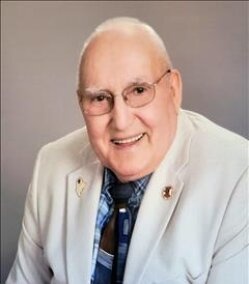 Princeton – Fernand J. Roussel, 84, passed away surrounded by family at his home on Saturday, October 2, 2021. Fernand was born in Saint-Jacques, NB, on April 1, 1937, son of Francis and Lyzanne (Grand Maison) Roussel.

At a young age, Fernand started working in the woods in Edmundston, NB for Frasier Paper Company. On August 7, 1956, he married his love, Laurianne Roussel. In 1964 the relocated to Maine and Fernand worked for Georgia Pacific until the mid 1970’s. Fernand loved farming and was known locally for his vegetables. He enjoyed hunting and spending time with his family. Fernand was a Communicant of St. James the Greater in Baileyville and was a member of Council #149 Knights of Columbus in Calais.

Visiting hours will be held 6-8 p.m. Wednesday, October 6, 2021 at Mays Funeral Home, 26 Church St., Calais. A Mass of Christian Burial will be celebrated by Father Kevin J. Martin 12 noon Thursday, October 7 at St. James the Greater Church, Baileyville. In lieu of flowers, donations in Fernand’s memory may be made to Council #149 Knights of Columbus, PO Box 305, Calais, ME 04619. Burial will follow in the Princeton Cemetery.


To order memorial trees or send flowers to the family in memory of Fernand Roussel, please visit our flower store.