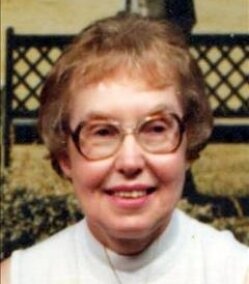 Calais - Eunice Ashby Churchill Bothwick died July 17, 2021 at her home on Lafayette Street in Calais. She was born on January 19, 1926 in Pembroke, Maine to Frank Hollis Ashby and Lillian Alexander Ashby Towns. From the age of two she resided in Calais until, after graduating from Calais Academy, she trained as a nurse at the Eastern Maine Medical Center. Returning to Calais she went to work at the Calais Hospital and eventually became the Director of Nursing. She later went to work in the office of Dr Hazen Mitchell and is still fondly remembered by many people who were treated there over the years.

The family wishes to express special thanks to her caregivers for the last several years- Regina Wilson, Laurie Preston and Judy Kierstead whose professional and loving care allowed Eunice to end her life at home.

In keeping with Eunice’s wishes, services will be private. Arrangements by Mays Funeral Home, Calais & Eastport.

To order memorial trees or send flowers to the family in memory of Eunice G. Bothwick, please visit our flower store.