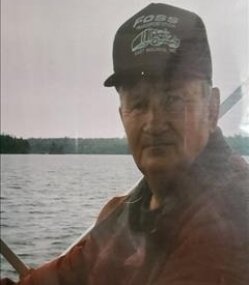 East Machias - Eugene Stoddard Sr. (LUCKY) passed away peacefully at his home on Gardner’s Lake with his family by his side at the age of 81 on August 18, 2021. Gene was born April 24, 1940 in Putnam Connecticut.

Gene worked at the logging mill when he was young, he harvested blueberries, delivered milk for Grants dairy and Shoppe farms, he ran a restaurant with his wife, and delivered Coco-Cola. Gene loved to fish and hunt; he spent many hunting seasons with his sons on the Machias River. Gene fished both summer and winter on Gardner’s Lake in which he caught over 300 salmon in his time of fishing. Gene loved his boats, four-wheeler, and his side-by-side. He spent time down to the lake watching all the boats and when he wasn’t there he would sit in the garage to talk with family and friends. Gene loved to talk on the phone, his son Gene called every night from Georgia at 6:30; Gene would call his son Johnny, daughter Jennifer and all his friends every day to check in on them. Gene was a loving and caring husband, father, grandfather, uncle and friend. He loved to socialize with people and tell stories.

There won’t be a service at this time; A Celebration of Life will take place the summer of 2022. Arrangements by Mays Funeral Home, Calais & Eastport.
To order memorial trees or send flowers to the family in memory of Eugene Elliot Stoddard Sr., please visit our flower store.