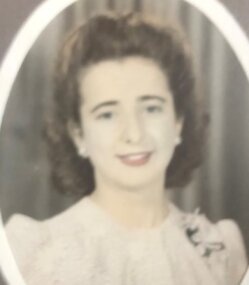 Eastport – Emily J. Stuart (North), 95, passed away peacefully with family by her side on January 11th, 2021 at the Eastport Memorial Nursing Home. Emily was born on December 7, 1925 to Archibald and Priscilla (Taylor) North in Eastport, where she lived out her life.

Emily, even though being born in Eastport, she lived her childhood years in Campobello (Welshpool area) where she attended grade school. She would always tell stories of her and her siblings picking raspberries at Roosevelt’s Cottage and selling them to the Roosevelt’s for 10 cents a quart. She loved living on Campobello and always shared her fond memories of growing up on the island. She was a teenager when they moved over to Eastport in 1941. Then moved to Michigan for a while returned to Eastport and met Gordon Stuart, in 1956 they were married. After Gordon’s unexpected death early on, Emily found herself raising their children on her own by working various jobs to make ends meet. She would make wreaths, worked at Holmes Sardine Factory, a clerk at Newberry’s Department Store. In her later years when people are getting ready to retire, Emily sought out education to become a Certified Nursing Assistant. Once certified, she spent 16 years caring for the residents at the Eastport Memorial Nursing Home; a job she so very much enjoyed. Although she was faced with hardship, Emily always found time to make a happy home for her sons. She loved to cook and made her big Sunday afternoon meal a family tradition. Emily enjoyed knitting and visits from her grandchildren.

In addition to her parents and husband, Gordon, she was predeceased by her son, Gordon Stuart Jr., sisters, Sarah White, and Dorothy Avery and a brother, Kenneth North.

A graveside service will be held at 11:00 am, Saturday, May 29th at Bayside Cemetery, Eastport. Arrangements by Mays Funeral Home, Calais & Eastport.

To order memorial trees or send flowers to the family in memory of Emily J. Stuart (North), please visit our flower store.