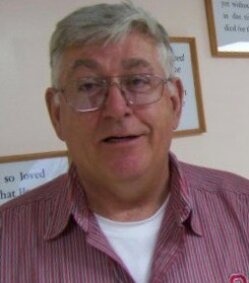 Elmer graduated from Pembroke High School, Class of 1964. On December 28, 1963, he married the love of his life, Sandra Avery. Elmer worked at the Mearl Corporation and as a millwright for Georgia Pacific. He left Georgia Pacific to help his son Tim with his business, Stevens’ Garage for a few years. Elmer returned to the Mearl Corporation, which became Engelhardt and later BASF. Later he worked as a pipefitter throughout New England for FastCo Corporation.

Elmer was a faithful member of the Eastport Full Gospel Assembly where he served as Deacon Board Chair for several decades. He was an avid hunter and sportsman. Elmer loved spending time with his family, especially his grandchildren, spoiling them with many sweets that their parents wouldn’t let them have. Elmer and Sandra enjoyed traveling to Florida each year to visit with family while going to various historical sites and numerous flea markets.

In addition to his parents, Elmer was predeceased by his wife and best friend of 57 years, Sandra Stevens; their son Elmer “Buddy” Stevens III; and a brother Jerry Lyons. Surviving are his four children, Tammy Dow and husband Stephen of Calais, Timothy Stevens and wife Sharron of Vestavia Hills, AL, Gregory Stevens and wife Shelen of Weston, OH, and Rhonda Stevens of Eastport; five grandchildren, Stephanie Briggs and husband Nathan of West Bath, Brandon and Abigail Stevens of Detroit, Shayne Stevens of Weston, OH, and Ethan Stevens of Eastport; two great-grandchildren, Evan and Alex Briggs; a brother Donald Stevens of Waterboro; and many nieces, nephews and dear friends.

A graveside service for both Elmer and Sandra will be held at 2:00 pm, Thursday, May 27th at Hillside Cemetery in Eastport. Arrangements by Mays Funeral Home, Calais & Eastport.


To order memorial trees or send flowers to the family in memory of Elmer Leeman Stevens Jr., please visit our flower store.