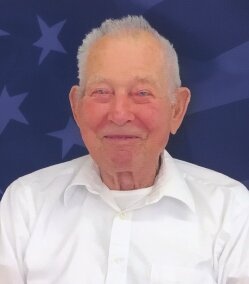 Harrington - Elbridge “Prid” Hale Dowling, 100, passed away at the Maine Veterans’ Home, Bangor on Dec. 11, 2020. Prid was born May 19, 1920 in East Machias, the son of George and Ivadell Huntley Dowling. He attended grade school in Jacksonville then went to Washington Academy in East Machias until he developed a severe case of pneumonia. The 6 mile walk to and from school was too much for his health, and he was unable to complete high school. Despite that he became a self-learned man, reading regularly after his busy days at work.
Prid left Maine for Staten Island, NY where he was employed on a dairy farm. After WW II began, he enlisted in the United States Coast Guard, serving from 1941-1945, first along the east coast in the NY area then in the South Pacific where he saw much action.

When he left the USCG, he returned to Maine, to Harrington where the love of his life lived. He married Verna Stevens on his 25th birthday, and they shared just 4 days away from 63 years. After doing a few odd jobs, Prid secured employment with the Bangor Hydro Electric Company. He retired from there at age 65 after 39 years, 7 months. He spent many retirement years enjoying his family, especially the grandkids, then the 5 great granddaughters, by whom he was affectionately called “Bump Bump”. He thoroughly enjoyed his hunting camp in TWP 30, built by him and his brother-in-law. He enjoyed immensely the grands and the great grands and delighted in their enjoyment of camp. As a family we enjoyed many Columbus Day weekends with a lobster feed and Thanksgivings with all the fixins. He loved anything nature, watching the deer, moose, partridge and any other wild animals, picking strawberries, raspberries, cranberries and blueberries, and looking for the best and prettiest lady slippers and mayflowers. He always knew the best places to look.

He was a member of Faith United Methodist Church, Columbia where he devoted many long days helping to build and doing nearly all the staining of the indoor woodwork. He was a 65 year member of Tuscan Lodge, Addison; belonged to the Order of Eastern Star, Addison; American Legion, Cherryfield; Veterans of Foreign Wars, Harrington; and held the Boston Post Cane for the town of Harrington.
Prid was predeceased by his parents, his loving and devoted wife Verna, 1 sister and 3 brothers. He was a devoted and loving caregiver for Verna as she battled Alzheimers for several years.

He is survived by his daughter, Hazel and husband Bernie Hammond of Columbia Falls, his son Jamie and wife Kathy Dowling of Harrington; granddaughter Sherri Dowling Tracey and husband Jason of Gouldsboro, granddaughter Terry Hammond Fitzhenry and husband Allan of Cutler, and grandson Tom Dowling and wife Tina of Newburgh. He was also blessed with 5 great granddaughters, Emma Fitzhenry, Ava Dowling, Amy Cox, Abby Fitzhenry and Addie Dowling.
Prid is also survived by his sister, Amy Graham of Marion, with whom he held a special bond, a special companion Laura Brown of Machias and a wonderful friend Paul Cox of Dennysville and several nieces and nephews.

A Celebration of Life will be scheduled at a later date. Donations in Prid’s memory may be made to: Faith United Methodist Church Building Fund, P.O.Box 186, Columbia, ME 04623; or Maine Veterans’ Home Machias, Activity Fund, 32 Veterans Way, Machias, ME 04654. Arrangements by Mays Funeral Home, Calais & Eastport.

To order memorial trees or send flowers to the family in memory of Elbridge "Prid" Hale Dowling, please visit our flower store.