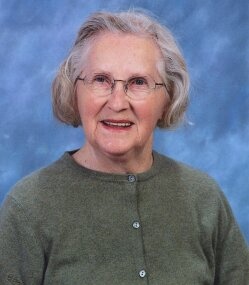 Edwina graduated from Calais Academy, Class of 1942. She worked at Ware Knitters in Calais and during WWII, moved to Connecticut where she worked for Hamilton Standard Propeller. Following the war, Edwina moved back to Calais and worked for Sears until marrying her love, Anthony DiCenzo on August 18, 1947. She became a Nurse’s Aide and worked for Calais Regional Hospital in the maternity ward, and sold bouquets of Mylar balloons out of her home. Edwina eventually became the bookkeeper for the family business, Anthony DiCenzo and Sons Inc. Edwina was a Communicant of Immaculate Conception R.C. Church in Calais, and was a member of the American Legion Auxiliary and the St. Croix Bowling Club. She enjoyed traveling, quilting, rug hooking, gardening, and crossword and jigsaw puzzles. Edwina loved spending time with her family and had many fond memories of the times she spent with her family at the family camp at Pleasant Lake.

The family wishes to thank the staff at Marshall Healthcare in Machias for the wonderful and comforting care they provided to Edwina.

In keeping with Edwina’s wishes, graveside services were private in Calais Cemetery. Arrangements by Mays Funeral Home, Calais and Eastport.
To order memorial trees or send flowers to the family in memory of Edwina Roberta DiCenzo, please visit our flower store.