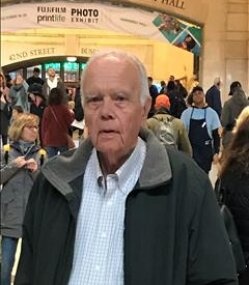 Calais, ME - Edward F. Hogan, 82, passed away on March 18, 2022. Son of the late Edward F. Hogan and Catherine V. (O’Donnell) Hogan, Ed was born in the Bronx, New York on March 19, 1939. During high school Ed worked in a local supermarket and for Western Union. Upon graduating from high school, he joined the United States Air Force serving with the Air Police in Alaska and Washington state. He eventually joined US Customs, Port of New York and later transferred to US Customs, Calais, Maine where he completed his government service of fifty-one years in March of 2013. Ed loved fishing, hunting, driving his truck and walking the Moosehorn Refuge with his much-loved canine pal, Patrick. He devoured books, blasted favorite music, enjoyed films and each winter sketched his garden.

He was predeceased by his amazing, loving, outgoing, and life-affirming wife, Ursula R. (Dunton) Hogan with whom he shared twenty-six years of marriage. He is survived by his brother, Bro. Kenneth V. Hogan, FMS, a Marist Brother, cousins, MaryJane Hunt of New York, Anthony O’Donnell and wife Jane of New Jersey, Helen and Greg McCauliff of Massachusetts and all of their families. He is also survived by niece Kathy Sullivan, nephews Jackie and Tommy Sullivan, and their families all of New Hampshire; Second cousins, their children and grandchildren from the Christy and O’Donnell families round out the list of relatives.

Ed had great respect for the military and all of law enforcement. He was most proud to be a partner with the women and men serving in Customs and Border Protection, all were second family to him. Heart-felt gratitude is extended to Ed’s amazing neighbors and to his friends at Customs and Border Protection, for their friendship, support, and especially the generosity of those who drove him to medical appointments in Bangor.

To order memorial trees or send flowers to the family in memory of Edward F Hogan, please visit our flower store.