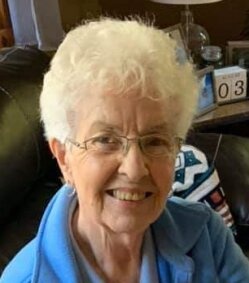 Calais – Doreen Elizabeth Hill, 89, passed away surrounded by family on Saturday, September 5, 2020 at Calais Regional Hospital. Doreen was born in Calais on May 25, 1931, daughter of the late John Philip and Dora Mildred (Purcell) McGarrigle.

After graduating from Calais Memorial High School class of 1949, she worked at Woolworth’s and Steve Hills bowling alley. In 1977, mom began her career at Calais high school where she helped feed students for 31 years. She was a faithful communicant of the Immaculate Conception Roman Catholic Church, where she was a member of the Ladies Sodality. Our mom performed with the Sweet Adelines on both sides of the border with her sister, our Aunt Marie, and her friends who were family, following in her father’s footsteps of musical performance. Our mom taught us about faith and family, those with whom she worked became family. She was truly a lover of people, giving unconditional love to all. She gave unselfishly to the community and help to anyone who was in need. She truly exemplified God’s love to all by putting the needs of others before her own. As a single mom, she was an ideal role model, she gave stability, steadfastness, and security to her children and was at home breakfast, lunch, dinner, and bedtime. Her family was the light of her life and she was the light of ours. Our mother was a woman of prayer and we will always remember her saying, “I’ll say the rosary for you” and she always would.

We would like to thank the nurses of Calais regional hospital who were there for our mom and us this past week.

Visiting hours will be held 4-7pm Thursday, September 10, 2020 at Mays Funeral Home, 26 Church St, Calais. A Mass of Christian Burial will be celebrated by Father Kevin J. Martin at 11 am Friday September 11, 2020 at the Immaculate Conception Roman Catholic Church, Calais Ave, Calais. The funeral will be also aired at 11:00am LIVE-stream on Saint Kateri Tekakwitha Parish Facebook page. Please adhere to CDC guidelines for public gatherings. Alternatively, all are invited to attend the graveside service immediately following the Mass service. Burial will follow at Calais Cemetery. Condolences and memories can be shared at www.maysfuneralhome.com. In lieu of flowers, donations can be made in Doreen’s memory to the Immaculate Conception Church or the charity of your choice.

To order memorial trees or send flowers to the family in memory of Doreen Elizabeth Hill (McGarrigle), please visit our flower store.