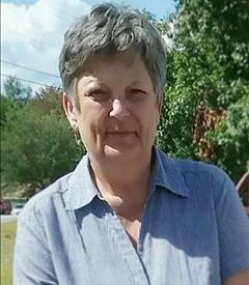 She graduated from Woodland High School, Class of 1975 and after, attended Washington County Community College to receive an associate’s degree in Secretarial Studies. She began her career at Fenderson Insurance Agency followed by a long career with Georgia-Pacific, where she met her husband of 33 years, David W. Brown. She began at Georgia-Pacific as a secretary then moved onto a role as an administrative assistant in the Human Resources Department. She ended her career, retiring with Cooke Aquaculture, as the Human Resources manager. She was a member of People’s United Methodist Church in Baileyville. Donna had a passion for crocheting and sewing, frequently making special pieces including quilts, afghans, prom dresses, and costumes for her children and grandchildren. In her earlier years, she could be found enjoying summers with family and friends at Pleasant Lake in Alexander.

In addition to her father, Leo Perkins, Donna was predeceased by her sister, Deborah (Perkins) White and her husband Randy White of St. Stephen N.B. She is survived by her mother Madeline (Deane) Perkins; her husband David W. Brown; four children Allison Seavey and husband Ahn Tran of Tumwater, WA, Veronica Seavey and husband Anthony Iannucci of Providence, RI, Jennifer Harris and husband Micah of San Marcos, TX, and Mitchell Brown of Austin, TX; two special nieces Melissa Brown and husband Chuck of St. Stephen, NB, and Krista White of St. Stephen, NB; grandchildren, Isabella and Leo Tran, Kaden McNeill, Jesse Seavey, Adriana Iannucci, Eloise Harris, Ryleigh and Kelly Brown; two fur babies Molly and Ainsley, and many extended family members; two lifelong friends Darlene Norman and Sue Mahar. The family would like to extend a special thank you to two wonderful caregivers, Rita Stewart and Sharon McGraw, for all their love and support, and to the nurses of CHCS hospice for their compassionate care.

A celebration of Donna’s life will be held at a later date in July at People’s United Methodist Church, Third Ave. & Summit St. Baileyville. In lieu of flowers, donations can be made in Donna’s name to Sarah’s House that helps support the region’s first and only cancer hospitality house and keeps doors open to the cancer patients of northern and eastern Maine. A donation link can be found at www.sarahshouseofmaine.org

To order memorial trees or send flowers to the family in memory of Donna Marie Brown, please visit our flower store.