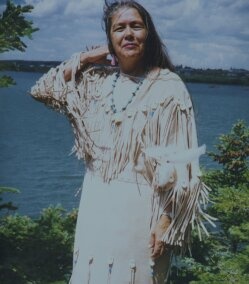 Pleasant Point – Dianne Mae (Paul) Apt, 76, passed away Monday, September 2, 2019 at her home surrounded by her family. Dianne was born at Pleasant Point on November 15, 1942, daughter of Annie Paul and Joseph Nicholas.

After attending Shead Memorial High School, Dianne married Forrest Apt Sr. Together they moved to Massachusetts where she raised their six children, and later became a CNA for a local nursing home where she met her second husband Dominic DeWolfe. In 1995, Dianne and Dominic moved to Pleasant Point where Dianne became active in making traditional Passamaquoddy Arts. Dianne loved to stay active, enjoyed going for walks, and spending time with her family, especially “her girls”, great-granddaughter Gwyneth, and granddaughter-in-law Brianna.

A celebration of Dianne’s life will be held from 1-5 p.m., Sunday, September 8, 2019, at her home, 25 Ballpark Rd., Pleasant Point. Arrangements by Mays Funeral Home, Calais & Eastport. Condolences and memories may be shared at www.maysfuneralhome.com
To order memorial trees or send flowers to the family in memory of Dianne Mae Apt (Paul), please visit our flower store.