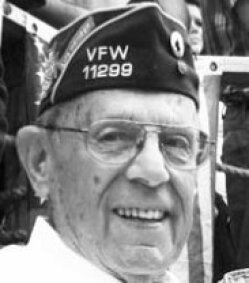 EASTPORT and RICHMOND, VA. –Dexter Ricker passed away on Sunday, November 29, 2020, at the age of 95 in Richmond, Va. He was born on September 15, 1925, in Perry, the son of Gibson and Thursea Leighton Ricker, later to be raised in Eastport by Nina Leighton Tabor and Claude Tabor on Kilby Street.

He was a U.S. naval veteran, having served from 1942 to 1946 as boatswain mate second class on the USS Pinnacle and USS Prime minesweepers. He was awarded two World War Victory Medals, the American Area Medal and the Asiatic Pacific Area Medal.

As a graduate of Shead Memorial High School, Class of 1941, and Ricker College, he had achieved a successful career as owner of a large commercial electrical contracting company in Trenton, N.J., which later afforded him a long retirement. With a lifelong love for the sea, he enjoyed sailing, cruising, traveling and spending time with family and friends, keeping homes in Hamilton, N.J., Hernando Beach, Fla., and returning every summer to Eastport to a home in South End. He was well read, well lived and shared endless stories on any topic – most notable were his stories of old Eastport.

His later years were spent in Richmond, Va., with Jacqueline Smith and her children, Beth, Wayne, Barry, Les and their families, where he lived an active life surrounded by loving and faithful family and friends. He was a devoted man, husband, father, grandfather and great-grandfather with an unwavering and unconditional love for his family. He will forever be in our hearts and is missed every day.

He was predeceased by his wife of 62 years, Frances Cook Ricker; and granddaughter, Lindsey Bernard. He is survived by his son, three daughters and their families, Scot and Cynthia Ricker, Janice Culver and Al DiDario, Julie and Daniel Smith and Joan and Ernie White; six grandchildren, Trevor, Brittany, Casie, Chris, Sara and Matt; and four greatgrandchildren, Ella, Colton, Parker and Paxton.

A memorial service will be held, 11:00 am, Friday, August 13th at Bayside Cemetery in Eastport. In lieu of flowers, donations in Dexter's memory can be made to Washington County Honor Guard, c/o Andrew Pottle, 506 South Meadow Rd., Perry, ME 04667. Arrangements by Mays Funeral Home, Calais & Eastport.

To order memorial trees or send flowers to the family in memory of Dexter C. Ricker, please visit our flower store.