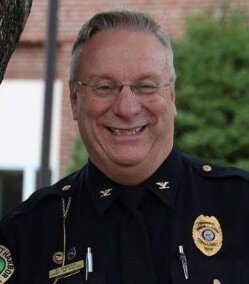 Sheppy was a Communicant of St. Joseph R.C. Church in Eastport and served on the Saint Kateri Teckawitha Parish Finance Council. He loved helping children and spent numerous hours volunteering as a D.A.R.E. Officer, several years with the Big Brothers Big Sisters Program where he has mentored countless young people, and most recently the Faith Formation Team at Pleasant Point. He was an active community member and his influence and impact is far reaching at individual and community levels.

In addition to his parents, Sheppy was predeceased by a sister Brenda. Surviving are his two children, Brianna Iversen and husband Nathan of Lansing, MI, and Brandon Chapais and wife Aubry of Paw Paw, MI; three grandchildren, Madison Elaine Iversen, Jackson David Chapais, and Hudson Todd Chapais; four sisters, Doreen Kilby and husband Phillip of FL, Linda Frye of NC, Becky Kierstead of Eastport, and Diane Jamieson and husband Fred of Limestone; many nieces, nephews and dear friends; and his “extended family” in the law enforcement community throughout the state of Maine.

To order memorial trees or send flowers to the family in memory of David Charles Chapais, please visit our flower store.