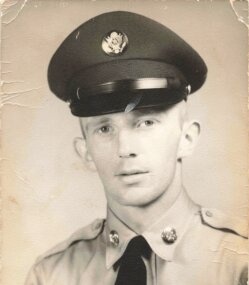 Robbinston – Darrell Albert Warren Jr, 76, passed away Sunday, February 7, 2021 at his home surrounded by his family. Darrell was born in Quincy, MA on February 21, 1944, son of Darrell A. Warren Sr. and Ruth (Wagner) Warren. During his early childhood, the family settled back to his father’s hometown, Robbinston, ME.

As a young boy, Darrell helped his mother after school at a restaurant once located at Brook’s Bluff Cottages in Robbinston. According to him, he was to help set the table, take out garbage, and peel a never-ending pile of potatoes! As a teen, Darrell helped his dad in various jobs and did farm work at “Bicknell’s Farm” in Red Beach.

Darrell attended Robbinston Grade School and graduated from Calais Memorial High School. Darrell met his wife, Mavis (Diffin) while in high school. They married in June of 1962. After graduation, Darrell enlisted in the United States Army. During his military service he was stationed in Thule, Greenland, as well as stateside in Alabama and Florida.

Upon completion of his military service, Darrell returned to Robbinston but soon after began working for New England Telephone Co. He and his family moved throughout much of the Eastern seaboard with this company and eventually settled in Chesterfield, MA and built a new home. While working for the phone company, he met a co-worker who would become his lifelong friend, Kirke Henshaw. Kirke and Darrell have many stories of work antics, bar rooms and family fun.

In 1970 Darrell and his family returned to Robbinston. His work as an “Install Repairman” with New England Telephone had him well known throughout Washington County. Darrell retired from the telephone company but worked part time as security for the Woodland Mill.

Darrell enjoyed to the fullest hunting deer and moose, and bass fishing. He always seemed to have a building project going. His absolute joy and peacefulness was at his home on Ebemee Lake in Brownville, ME.

In addition to his parents, Darrell was predeceased by his son-in-law and friend, Wayne Leavitt; and a nephew Tim Avery. Surviving are his wife of 58 years, Mavis; his sister Sandra Galaway of El Paso, TX; his four children, Rene’ Leavitt, Bill Warren, Darylann Warren and Gerard Warren; ten grandchildren; and 19 great-grandchildren.

A special Thank You to all “dad’s girls” and granddaughter Erin for their extra special loving care and support to the family.

At Darrell’s request, there will be a private graveside service for the family only. Arrangements by Mays Funeral Home, Calais & Eastport.

To order memorial trees or send flowers to the family in memory of Darrell Albert Warren Jr., please visit our flower store.