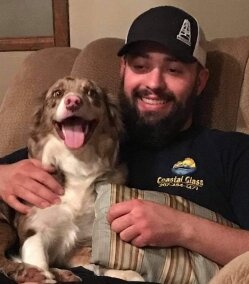 After graduating from Calais High School, Class of 2010, Daniel worked in the glass field until enlisting in the U.S. Air Force. During his enlistment, he went to boot camp at Lackland AFB in San Antonio, TX, technical training at Naval Construction Battalion Center in Gulfport, MS, stationed with the 5th Civil Engineer Squadron at Minot AFB, ND, and was deployed to Qatar and Kyrgyzstan. Following his service, Daniel returned home and started his own business with his father, Coastal Glass LLC. He took great pride in his work and his perfection was noted by all his customers.

Daniel was a member of St. Croix Valley Chamber of Commerce, receiving the New Business of the Year Award in 2017. He was an outdoors enthusiast, loving to spend time in the woods or on the water. He enjoyed riding his motorcycle and dirt bike, snowboarding, fishing, hunting, and keeping his own aquarium of bait fish for ice fishing. Daniel was proud of his 1971 Chevelle, and loved spending time with his two border collies, Molly and Kota.

Daniel loved his family and cherished the many family gatherings throughout the years. Perhaps his best times were spent with his two brothers and best friends, Chris and Josh. Daniel will be remembered by all who knew him for his kind heart, going above and beyond to help anyone in need, and his amazing infectious smile and laugh.

Daniel was predeceased by his maternal great-grandparents, Arnold and Ruth Hartford; paternal grandfather Nelson V. Stewart; an uncle Kenneth Flewelling; and a cousins John Neddeau. Surviving are his parents, Todd and Bonnie Stewart of Robbinston; his brothers, Chris Stewart of Portsmouth, NH, and Josh Stewart and companion Nicole Clark of Robbinston; maternal grandparents, Mike and Joan McLean of Calais; paternal grandparents Nelson “Sonny” and Rita Stewart of Baring; aunts and uncles, Tracey Flewelling of Levant, Tammy and Richard Allen of Robbinston, Roger and Shirley Lane of Baileyville, and Beth Lane and Jason Olson of Baileyville; many great-aunts and great-uncles; special cousin and best friend, Greg Candelmo; and numerous cousins and friends; and his two faithful canine companions, Molly and Kota.

A Celebration of Daniel’s Life will be held at a later date. In lieu of flowers, donations in Daniel’s memory may be made to the Maine Veteran’s Project, www.maineveteransproject.org Arrangements by Mays Funeral Home, Calais & Eastport.


To order memorial trees or send flowers to the family in memory of Daniel James Stewart, please visit our flower store.