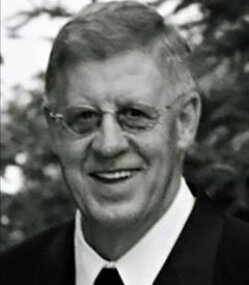 On May 1, 2020, Dana A. Brooker, 76, passed away at Charlotte County Hospital in St. Stephen, N.B. Dana was born in St. Stephen N.B., on May 11, 1943. He was the only child of Alvie and Lydia (Polleys) Brooker. Dana grew up in Baring where he learned to hunt and fish with the other kids his age. He especially liked fishing at Big Lake, where he and his friends spent the nights camping on the shores.

After graduating from Calais Memorial High School in 1961, he joined the U.S. Army. Most of his service time was spent in Okinawa, Japan. He always referred to his military home as “the big rock.” Although he joked about Army life, he genuinely enjoyed his deployment.

After his military career, Dana returned to Baring and worked for the New England Telephone Company as a lineman. He worked in several different states doing line work especially after major storms. After a few years of linework, he was introduced to his future wife by mutual friends. Dana married Margaret (Gullison) Matheson and moved to St. Stephen and worked for NB Tel until retirement.

Dana was a Master Mason with St. Croix Lodge No. 46 and Luxor Shriners of New Brunswick, joyfully serving in the Clown Unit. Many of his old-time friends would offer that this was “the perfect place for him.” He enjoyed entertaining families along the parade route, making them laugh.

Dana will be deeply missed and always remembered for his sincerity, honesty, and good humor. He is survived by his loving wife Margaret; son David Brooker of Hampton, N.B; his daughter Julie Hartford and her husband Orville of Veazie, ME; and his grandchildren, Corey, Melissa, Sarah, and Amelia.
In lieu of flowers donations in Dana’s memory can be made to the Luxor Shriners of NB or the Anah Shriners of Bangor, ME.

A memorial service will be held at 2pm on June 11, 2022 at Mays Funeral Home, 26 Church St., Calais, and also live-streamed on www.MaysFuneralHome.com Burial will follow immediately at the Baring Cemetery with full military honors.

To order memorial trees or send flowers to the family in memory of Dana Alvie Brooker, please visit our flower store.