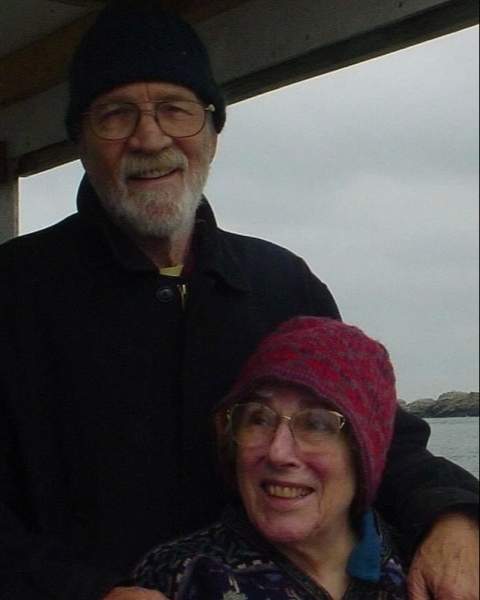 Collin St. Clair (neé Rathbone) died peacefully at home after a long battle with dementia at the age of 89 on August 19, 2022 at around 5PM. She was born in Island Park, IL on March 31st, 1933, to John “Jack” and Alice Rathbone. She was predeceased by her husband, Bob St. Clair.

The daughter of a military father, Collin traveled around the country during World War II and spend three years in Japan as a teenager. Collin met Bob while attending George Washington University, where she graduated with a degree in chemistry. She helped him run his chemical business after they both graduated. She went on to spend 20 years running an interior decorating business later in her life. As her illness progressed, she and Bob moved from their longtime home in Arvada, CO to Eastport to spend their last years with their youngest daughter and her family. In her spare time, she enjoyed making sculptures and spending the days with Bob.

Collin is survived by her two daughters, Adrienne St. Clair of Denver, CO and Alice Schuth and her husband Brian of Eastport; her sister Susan Hardcastle, and nieces Beth Gottlieb and Helen Lane, all of the Nashville area; her three grandsons: Sam and his wife Natalie (Whitcomb) of Biddeford, Henry and his partner Sarah of Somerville, and Frank of Somerville; she was able to meet her great-granddaughter Molly, who was born in May 2021.

Donations in Collin’s memory may be made to the Eastport Arts Center, where alongside Bob she was able to enjoy performances from her daughter, son-in-law, and grandchildren.  Arrangements by Mays Funeral Home, Calais & Eastport.
To order memorial trees or send flowers to the family in memory of Collin R. St. Clair, please visit our flower store.