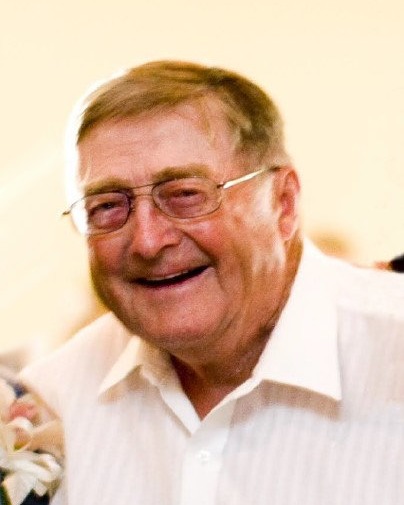 Claude M. Scribner, 98, passed away at the Maine Veterans Home-Augusta on October 14, 2022. He was born on November 24, 1923, the son of Harry and Flossie Scribner of Topsfield, Maine. He graduated from Lee Academy in 1942 where he excelled in cross country and was a member of the state championship basketball team. He volunteered for the draft in the U.S. Army during WWII. After receiving his training, he was sent to England, Normandy, Northern France and Belgium. After VE Day, he returned to the US given a months leave and was headed to training to go to the Pacific. After the war, he came back to Lee and married Charlene (Blake) Scribner.

He was one of the six men who invested in and built Mt. Jefferson Ski Area. He enjoyed fishing and camping. Charlene and he took seven trips to Newfoundland with friends to fish. He also enjoyed spending the winters fishing with his old fishing buddies in their separate shacks. In his early years, he worked for Malletts Mill. He owned and operated his own trucks for a while and then bought his own skidder and cut wood until his retirement. After retirement, Charlene and he traveled to Florida, Tennessee and Machias visiting their children and grandchildren. In 2014, Claude and Roland were able to travel to Washington, D.C. through the Honor Flight of Maine with Jane and Rick as their chaperones.

He was predeceased by his mother, father, wife and his four siblings, Jackie Capps, Maude and Floyd Cobb, Dick and Phyllis Scribner and Roland and Joan Scribner; daughter-in-law, Anna Lee Scribner; sister-in-law, Dorothy Linscott and brother-in-law, Robert Blake. He is survived by his three children; Rick and JoEllen Scribner, Jane and Bruce Clendenin, and Claudette and Carroll Albert; his six grandchildren, Rob and Gina Scribner, Andy Scribner, Bart and Jennifer Clendenin, Sterlynn and Aaron Marx, Carol-Ann and Branden Crocker, Jake Albert, and eight great-grandchildren. He is also survived by his brother-in-law Lawrence and Kendra Blake and sister-in-law Barbara Cameron.

In lieu of flowers, donations can be made to the Penobscot Valley Humane Society, P.O. Box 73, Lincoln, Maine 04457. A Military Service will be held at Mallett Hall in Lee, Maine at 1 pm on November 6, 2022. Arrangements by Mays Funeral Home Calais & Eastport.

To order memorial trees or send flowers to the family in memory of Claude M. Scribner, please visit our flower store.