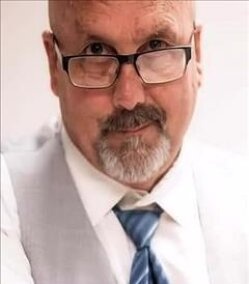 Baileyville – Christopher Dale McClure, 62, passed away Saturday, December 18, 2021, following a courageous battle with leukemia and ultimately COVID while surrounded by family. Chris was born in Calais on June 17, 1959, to Daryl & Carla (McFarlane) McClure.

In his younger years, Chris lived with his parents in Calais. Chris spent much time at the homes of his beloved grandparents, Bernie & Bertha (Wilson) McClure and Austin & Lois (Brown) McFarlane. Later, he moved to Princeton to be raised by his Dad, Daryl and Mom, Wanda (Sprague) McClure. Chris enjoyed his years living on the river in Princeton where he spent countless hours fishing, boating, hunting and snowmobiling as well as spending time with his grandparents Percy and Laura Sprague.

Chris graduated from Woodland High School in 1977 then went on to obtain his mechanics certificate from Washington County Vocational School. In Calais, Chris met Cheryl (Bartlett) McClure, and together they had their children, Jamie, Morgan and Christina.

Chris began his working career working alongside his grandfather, Percy Sprague at the Princeton Sawmill and later moved on to Leon Williams. In 1988, Chris & Cheryl moved their family to Pittsfield, Maine where he received a promotion to Hancock Lumber. Chris also had a successful career as a self-employed millwright for many years. Chris was inventive and shared a deep passion for the sawmill industry. Chris later worked in the heating industry, where he earned his CDL and his Master Boiler Technician License.

In 2009, Chris was diagnosed with chronic lymphocytic leukemia and shortly thereafter, kidney cancer. During this time, Chris focused on his health and treatments. In 2017 Chris began working as custodian at Alexander Elementary School where he affectionately became known as “Mr. Chris” to students and staff. He always took great pride in any work he did. Chris was a talented man with a wide variety of knowledge in almost anything.

When Chris wasn’t working, he could be found fishing anywhere he could throw a line in. In his younger years, his canoe was precious to him. He often spent time with his grandsons, shooting guns and years ago enjoyed hunting. His children have fond memories of many camping trips, vacations and drag racing events. Chris was a force of nature, determined to provide for his family and give them the life he felt they deserved. His family meant more to him than anything else in the world, something he often mentioned. He was unendingly proud of Jamie, Morgan, Christina and his seven grandchildren and always tried his best to support them. Anyone who knew Chris knew that he was the most loving father and the friend you could always count on. He was a selfless man, who seldom complained about what life threw his way and would do anything for anyone.

A Memorial Service will be held at 1:00 PM, Saturday, January 22, 2021 at Brookings-Smith, 133 Center Street, Bangor. The family invites relatives and friends to share conversation and refreshments at the Family Reception Center of Brookings-Smith, 163 Center Street, Bangor, following the service. A private graveside service and Celebration of Life will be held in the spring. Donations will be made to the Alexander Elementary School in memory of Chris. Arrangements by Mays Funeral Home, Calais & Eastport.

To order memorial trees or send flowers to the family in memory of Christopher Dale McClure, please visit our flower store.