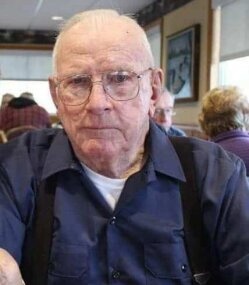 CALAIS- Charles E. White, 87, passed away in the early morning of Monday, May 18, 2020 at Northern Light Eastern Maine Medical Center in Bangor. Charlie was born in Weld, Maine on November 11, 1932, the youngest son of Coolidge and Eva (Osborn) White.

Charlie went to work in the woods with his Dad at an early age and went on to serve 3 years in the National Guard. On November 17, 1951 he married Marguerite Keenan in Woodland and together they raised 4 daughters. After working in the woods, he went to work for Georgia Pacific as a millwright for several more years. He then opened and operated White Bros. shop in Baring.

Charlie was one of the founding members of the Breakneck Mountain Sno-Riders and ATV Clubs in Alexander, remaining a member for 20 years, and also serving as Trail Master. He was a member of the St. Croix Wanderer’s RV club for several years. And was also a member of the Church of the Open Bible in Alexander. In his younger years he raced stock cars and snowmobiles. He enjoyed tinkering in his garage and spending time outdoors, especially working and riding on the club trails. Charlie liked watching westerns and NASCAR. And most of all, he loved time spent with his family.

In addition to his parents, he was predeceased by his sister, Rowena and her husband Everett Bates, sister-in-law Dot White, brother-in-law Everett Dwelley, and three grandsons; Leslie Knowles II, Charles E. White, and Charles M. Wallace.

To order memorial trees or send flowers to the family in memory of Charles Edwin White, please visit our flower store.