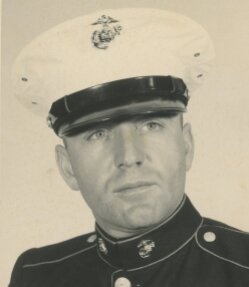 During WWII at 16 years old, Chuck enlisted in the U.S. Merchant Marines as a baker/cook. In 1948, he enlisted in the United States Marine Corps, where he became a drill instructor at Camp Pendleton, CA, Brig Warden in Okinawa, Japan, a Marine Corps Recruiter in Colorado Springs, CO, and fought in the Korean War and Vietnam War, being a veteran of three wars.

After retiring from the Marine Corps in 1968, Chuck went from Firefighter to EMT, to Fire Captain at the Point Loma Nuclear Submarine Base in San Diego, CA. Among many certificates for Bravery, in 1983, Chuck received the U.S. Coast Guard Public Service Commendation. Also in 1983, Chuck retired from the Fire Department, married Valerie (Diehl) Maggiani, and became a Probation Officer in Grants Pass, OR.

In 1988, Chuck and Val traveled across the country and discovered Eastport, Maine. A short time later, he was hired as an Eastport Police Officer, and on June 15, 1990, La Sardina Loca Mexican Restaurant & Cantina was born.

On November 23, 2000 to December 2000, a Proclamation was written to “Honor Chuck the Title of Honorary Son of Maine”, declared by Gov. Angus King. In 2015, Chuck was chosen to travel as a guest of “The Honor Flight” to Washington, DC for WWII Veterans. His loyalty and love for his country was truly celebrated. Chuck was a member of the American Legion, Marine Corps League, and the VFW.

Chuck was predeceased by his mother and father; sister Georgia; and many many loved ones. He is survived by his wife Val; sons Lenny and Tommy; daughter-in-law Weeze; granddaughters Journey and Sarah; and his great-grandchildren, McKeyan and Maliya. Chuck is also survived by and predeceased by the La Sardina Loca family members.

A Mass of Christian Burial will be celebrated at 11:00 am, Saturday, September 4th at St. Joseph’s R.C. Church in Eastport. Burial will follow with military honors at Bayside Cemetery in Eastport. In lieu of flowers and in memory of Chuck, “Just be kind to each other.” Arrangements by Mays Funeral Home, Calais & Eastport.
To order memorial trees or send flowers to the family in memory of Charles Leo "Chuck" Maggiani, please visit our flower store.