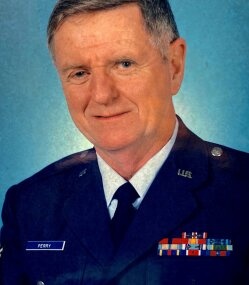 MILLINOCKET – Byron Leroy Perry, Sr. beloved husband of Shirley (Morton) Perry, passed away peacefully in his sleep early Monday, March 30, 2020 at his home in Millinocket at age 83. He was born March 11, 1937 in Millinocket and was the youngest of eight children born to Hazel M. (Curren) Perry and James R. Perry, Sr.

Byron loved his family, the Millinocket community, and his country. He was born and raised in Millinocket and lived his entire life in the same house he was born in. He graduated from Stearns High School, where he was one of the original “Minuteman” mascots, and went on to serve as a weapons instructor in the United States Marine Corp. He was stationed in Parris Island, S.C., where he met the love of his life Shirley, whom he married almost immediately and shared the remainder of his life with. After his service in the Marines, Byron returned to Millinocket to work for Great Northern Paper, where he spent the next 40 years working as a papermaker and serving a term as President of the Papermaker’s Union. His love for the military continued, and he served as a reservist for the Army National Guard and Air National Guard, travelling to many places around the world as part of his duty. Byron loved spending time with his family –gatherings at “camp” at Smith Pond, playing cards, hunting and fishing, blueberry picking in Baxter State Park, attending all of his kids sporting events, snowmobiling, and trips to Old Orchard Beach. He loved music, playing the piano, and loved singing with Dot and the Has-Beens. Everyone in town knew “Barney” – and probably bought beef jerkey, a pool ticket, or some house numbers from him! He truly loved life – and when asked how he was doing, would always answer “I couldn’t be any better unless there were two of me”.
His kindness, love, humor, and devotion will be deeply missed. He had an incredible spirit that left an impression on whomever he met. Though he has gone home to be with the Lord, love and memories remain to help see us through until we are with him again.

He is survived by his beloved wife of 63 years, his “Southern Belle”, Shirley Perry, his son James Perry and his wife Cindy; son Byron "Barney" Perry, Jr. and his partner Cheryl; daughter, Tanya Perry; grandson, Wesley Perry and fiance Annie; great-grandson Tyler and great-granddaughter Felicity; grandson Derrick Perry and his fiancé Kyia; grandson Jordan Perry and his wife Nicole; great-granddaughter Oaklyn; sister in law Barbara “Bobbi” Evers; sister in law Ella Keadle; and many precious nieces and nephews and their children.
Our family is so grateful for the care and compassion he received over the last few months from Community Health and Counseling Hospice, especially family friend Debbie Kranich, and from the support we’ve received from the Katahdin Area Support Group.

Funeral services are being postponed and will be scheduled for later this spring. Gifts in memory of Byron may be sent to Community Health and Counseling Hospice services at 313 Enfield Road, Lincoln, ME 04457.

To order memorial trees or send flowers to the family in memory of Byron Leroy Perry Sr., please visit our flower store.