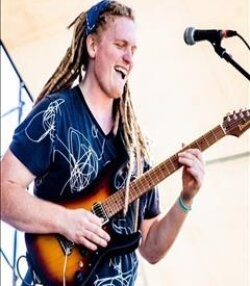 Blake Hamilton Ford, 29, passed away Wednesday, July 28, 2021. Blake was born in Raleigh, North Carolina, on November 5, 1991. Blake’s entrance into this world was a blessing to his parents, Richard Hamilton Ford Jr. and Diane Cyr Ford.

Blake’s initial roots were started in Asheville, North Carolina, where he flourished in school and basketball. During the summers his family would vacation in Princeton, Maine. When Blake was in middle school they moved there full time. Here Blake established deep roots. He attended Calais High School, Class of 2009, where he participated in Jazz Band and Student Council, and was a fierce leader on his football team, leading them to many victories. He won a State Championship in Track & Field throwing shot put (which he would continue in college), and traveled the east coast collecting awards for Olympic weight lifting.

At 15 years old, Blake discovered his passion for music and taught himself to play guitar. Blake never hesitated to pursue what was important to him, leading him to turn down a football scholarship so he could study Music Education at the University of Maine in Orono. During his years at UMO, Blake excelled in his classes. He made such an impression in the music program that he toured the state with the University of Maine Symphonic Band, and was featured as the first guitarist to play with them. Blake graduated from the University of Maine, Class of 2013, but his musical journey was just beginning. It was during his time at the University of Maine that he met his band mates and formed the band Zillawatt, playing countless shows at local venues. After graduation, they moved to East Hartford, Connecticut, to expand their musical reach.

Once in Connecticut, Blake established new roots, and developed a wide network of fellow musicians and friends. Blake spent his time in Connecticut collaborating with and inspiring other musicians. Once you heard his music, he could never be forgotten. Blake was practicing any moment he could, always seeking lessons and providing lessons for other musicians. He even began teaching himself how to build and repair guitars. He was an inspiration to anyone who knew him. His band, Zillawatt, made waves in many venues across New England, until the Pandemic hit and venues were forced to close down. During this time, Blake returned to Alexander to help care for his father. His love and devotion to his father helped save his father’s life and inspired other family members. Blake was a loving son, brother, uncle and husband.

Blake cared deeply for others, and was quick to make friends. He made people feel important, and it was almost impossible to lose that friendship. Blake worked as a Behavioral Health Professional for over ten years, touching the lives of many clients on the Autism spectrum and their families. He helped more people than he realized, and was considered family to so many. He cared deeply for his family and loved spending time with his siblings and nieces and nephews. On May 26, 2018, Blake married his high school sweetheart, Brandy Carle. They shared countless memories together and loved going on adventures whenever they could. Blake’s presence brought music, laughter, and inspiration to any situation.

To those who knew Blake, and to anyone reading this, please honor his memory by always challenging yourself, follow your passion, inspire others, never stop working on yourself, and make sure your loved ones know they are loved. Arrangements by Mays Funeral Home, Calais & Eastport.

To order memorial trees or send flowers to the family in memory of Blake Hamilton Ford, please visit our flower store.